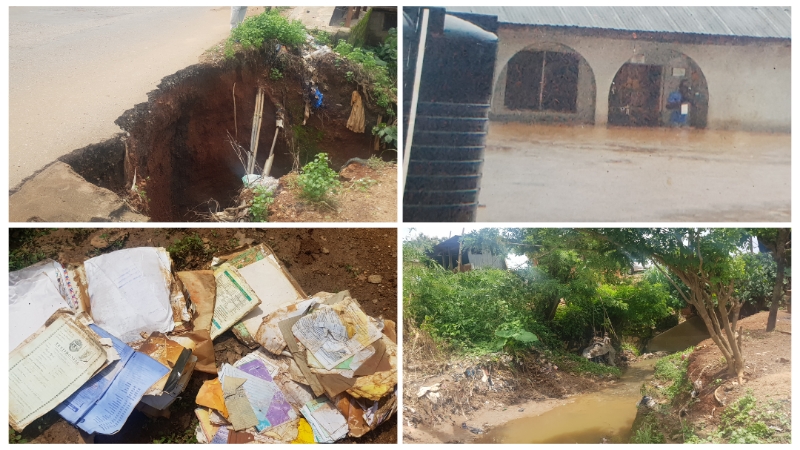 Barely three days after the expansion of drainages and dredging of some waterways in Ilesa, an ancient town in Osun state, the heavy but severe downpour that happened on June 22, 2021 has not only exposed the lapses surrounding the expansion of the drainages but also destroyed properties of residents living within the areas.

WITHIN NIGERIA reporter who visited some of the affected areas found most residential buildings near the drainage in deplorable and pitiable state as the damages caused by the torrential downpour which was assisted by drainage lapses are still fresh.

In the course of inspecting the damages and likely causes of flood in the area alongside residents and community leaders, WITHIN NIGERIA reporter observed that the expansion of the drainage which is relatively wide than the size of the “short bridge”, prevented free flow of water from one side to the other.

WITHIN NIGERIA gathered that there is no proper culvert that will allow free flow of water and the expansion of drainages which is relatively wide than the “opening of the bridge” has made it impossible for large volume of water to freely escape to other side and end up spreading across the community, causing damages to residential buildings and farmlands.

Decrying the extent of damages caused by the flood such as destruction of farmlands, academic ceritificates, house properties and others, residents of the affected areas narrated how the incident took place and called on state government especially the ministry of environment and sanitation to rescue the communities from the erosion threatening their habitats.

One of the residents in her fifties identified as Ayodele Funmilola told WITHIN NIGERIA that the flood has really caused a lot of troubles for her family owing to the destruction of their properties.

According to Mrs Funmilola, the issue started the day the government started dredging of the river which made matters worse. We would have prevented the contractors from working if they started from our area.

The rather sad resident recounted how she took photographs to the contractors, complainly bitterly about the size of the bridge and they vowed to do a fantastic job.

“Three days after, there was a heavy downpour leading to destruction of our properties. There would have been loss of lives if the said incident occurred in the night. Our house was so full of waters that members of a nearby church and other residents assisted us in channeling the waters out of our house”, she said.

Mrs Funmilayo Olatunde, a food vendor and resident of the affected areas told WITHIN NIGERIA that the incident occured around 5pm on Tuesday, June 22, 2021. We have had similar cases in the past but this is more deadly and serious. The lapses in the expansion of drainage caused the flood and we appeal to the state government to intervene and rescue us.

Another resident of the affected areas identified as Mr. Adejola Ojo told WITHIN NIGERIA that the first case of flood happened during Aregbesola’s administration which was reported to then caretaker chairman of our local government who visited and inspected the incident but they did nothing.

Appealing to the state government to fix the bridge, Mr. Adejola further revealed that waters from six streets within the ancient town pass through this short bridge and when these waters can not freely move, they tend to spread and cause havoc.

Reacting to the development via a telephone interview with WITHIN NIGERIA, Hon. Commissioner for Environment and Sanitation, Oladepo Solagbade said he is aware of the tragic incident and his ministry alongside the ministry of water and energy have taken it up.

Solagbade told WITHIN NIGERIA that he has discussed extensively with his counterpart, Hon. Commissioner for water and energy who notified him about the flood and further revealed that they intended to visit the affected areas on Monday but had to shelve it for excos meeting.

According to the commissioner, officials of Osun State Emergency Management Agency have been sent to access the damages of the areas.

Both ministries will visit the areas too for spot assessment and we will take necessary steps to fx the issues immediately. Eventhough we are clearing most of the streams and expanding drainages in Ilesa and I still do not know why it happened but it will be visited and fixed, the commissioner added.