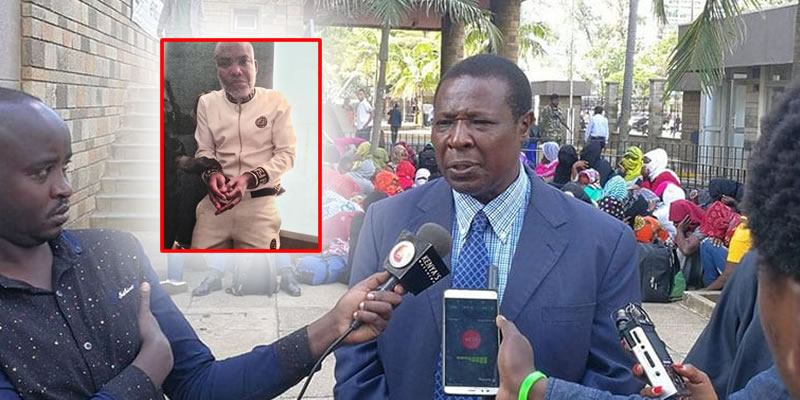 Kenya’s Director-General of Immigration Services, Alexander Muteshi, has reacted to the the arrest and “extradition” of the Supreme Leader of Indigenous People of Biafra, Mazi Nnamdi Kanu, to Nigeria.

Muteshi dismissed the claims of Kenya’s complicity in the arrest of the IPOB leader.

Reacting to same issue of Kanu’s arrest, an Official in the Kenya Ministry of Interior said that the ministry is not aware of the “extradition” of IPOB leader to Nigeria.

WITHIN NIGERIA recalls that Kanu’s brother, Kingsley had claimed that whilst visiting Kenya, the IPOB leader was detained and handed over to the Nigerian authorities who then flew him to the country.

“Whilst visiting Kenya, Nnamdi Kanu was detained and handed over to the Nigerian authorities who then flew him to Nigeria,” he said.

“Both Nigeria and Kenya must be held to account. I demand justice for my brother, Nnamdi Kanu.”

However, Kenyan government officials have dismissed the family’s claim in separate interviews with Reuters and Kenya’s Nation newspaper.

“A spokeswoman for the Kenyan interior ministry said it was not aware of the matter, while the foreign affairs ministry in Nairobi did not respond to a request for comment,” Reuters said in its report.

Also, Muteshi while dismissing the family’s claim told Kenya’s Nation that it was not possible to tell whether Mr Kanu had entered Kenyan territory.

“I can’t know that,” Mr Muteshi said when asked whether the claims made by the family were true.