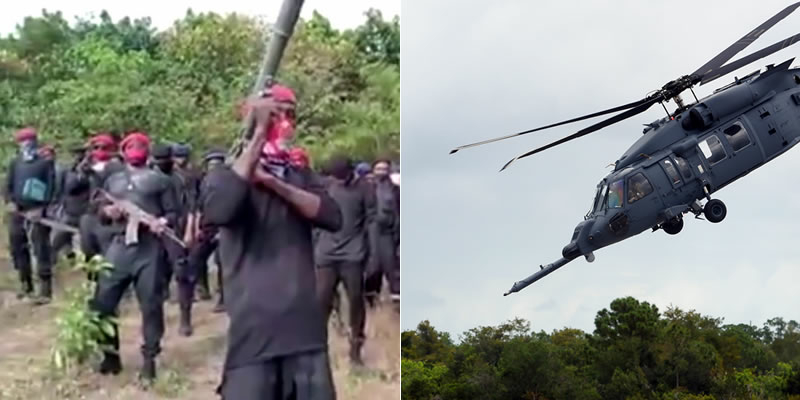 Nigerian military fighter aircrafts have reportedly been raining strikes on forests which are suspected to be hideouts of the Indigenous People of Biafra (IPOB) in Delta state.

According to SaharaReporters, residents of communities such as Anwai in Asaba, Ugwuwaosu and Ugbolu said the aircraft they sighted flew low over houses to rain strikes.

“The helicopters passed two times this morning and then we heard booms. Why are they targeting non-existent IPOB and where were they when faceless Fulani herdsmen wrote a threat letter to attack Delta?

“The military aircraft has been disturbing the serenity of our communities and this should stop. We have babies, small children and aged persons who can die from shock,” a resident lamented.

The state Commissioner of Police, Muhammed Ari, confirmed that a security team led by the Nigerian Air Force (NAF) led an operation where some IPOB were bombed in Delta State.

Earlier, Ari had said the police used helicopter in the state capital around lllah to disperse members of IPOB and send a signal to them that the command is in charge.

He said, “Illah is the base of IPOB. They come from Onitsha, Anambra State to regroup in Illah. We must tell them they are not welcomed in the state. Delta State would be hot for them. Once we identify them from the air, we shall make sure we send them parking and if care is not taken, deal with them the way they want.”

But the acting police public relations officer, DSP Bright Edafe, described the tension in the area as a hoax.

Edafe said people were just spreading rumours, insisting that there was nothing like an attack in the community.

“There is nothing like that in Okpanam, the area is peaceful. If they hear a gunshot, they will begin to speculate about what is not happening. I can tell you that what is going on in Okpanam is a situation issue which I will not discuss in public,” Edafe said.