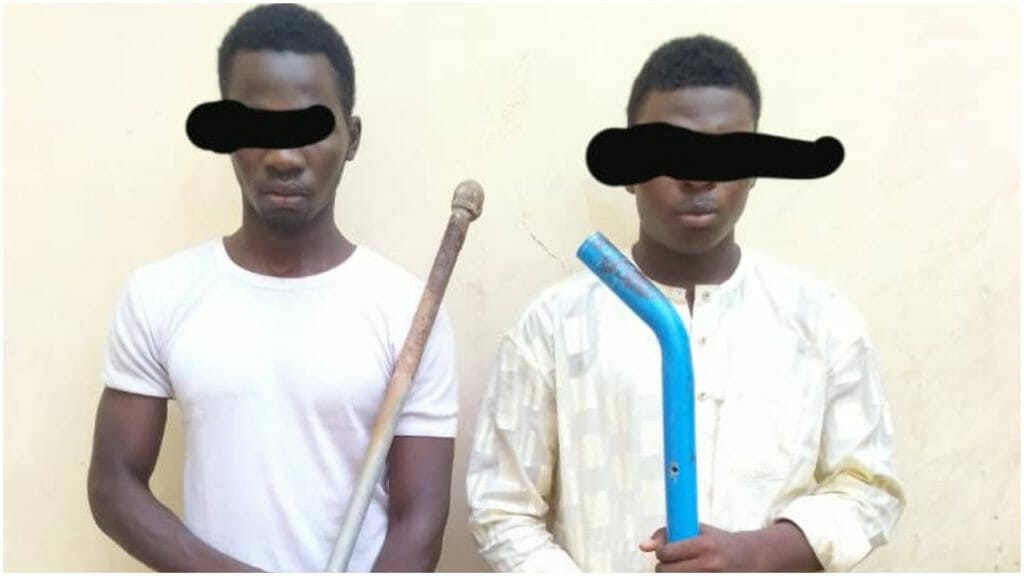 Four suspects have been arrested by the Police in Damaturu, the Yobe state capital for their alleged involvement in armed robbery and culpable homicide.

He said the suspects are: Umar Shaibu, Tajjuddeen Taufiq, Isma’il Mohammed and Bulama Modu all residents of Damaturu were apprehended during a sting operation carried out by detectives of ‘B’ Divisional Police Headquarters.

“On 23th July, 2021 at about 1130hrs, a report was received from one Abubakar Musa an employee of UBA Bank, Damaturu branch that the Victim one Hassan Abubakar a co-employee did not report for duty and efforts to trace his where about proved abortive.

“Consequently, detectives swung into action and stormed the house of the victim.

“His home and premises were searched and blood stains were observed on the floor with some iron rods covered with blood probably used in the commission of the offence.

“On 24th July, 2021 the principal suspect who happened to be the house help of the Victim was arrested while carting away valuable items from the victim’s house”, he explained.

According ASP Abdulkarim upon interrogation, the prime suspect confessed to the crime stating that on 22nd July, 2021 him and three others attacked the victim in his house at Red Bricks Housing Estate in Damaturu, robbed him of money, but ended up killing the victim and buried the corpse in the compound and fled.

He added that the case is under investigation for subsequent prosecution.

The PPRO noted that the State Commissioner of Police, Yahaya Abubakar was saddened by the acts of the culprits and seized this medium to condole with the family of the deceased. “He equally assures justice for the victim”.

“The CP calls on members of the general public to be vigilant at all times and report suspicious acts and movements around them to the nearest Police Station or formation”.