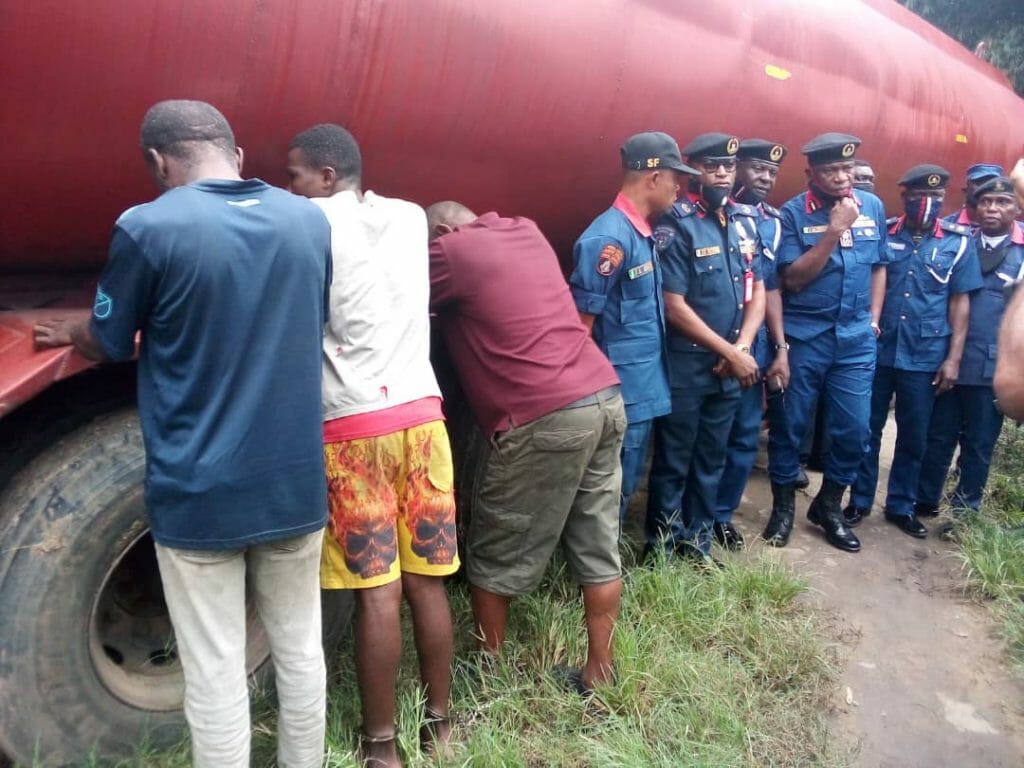 Five suspects have been arrested by the Akwa Ibom State Command of the Nigeria Security and Civil Defence Corps (NSCDC) with a truck load of 200 cellophane bags filled with suspected adulterated Automotive Gas Oil (AGO) and another truck containing 33,000 litres of petroleum products.

Mr Abidemi Majekodunmi, the State Commandant, disclosed this while briefing newsmen at the command’s exhibits yard in Uyo on Saturday.

Majekodunmi said that two suspects, the truck driver and conductor, were apprehended along Itam Road, Itu Local Government Area, with an articulated truck containing a consignment of what was suspected to be illegal petroleum products.

According to him, the other three suspects were nabbed by the Nigerian Army with a 33,000-litre truck loaded with petroleum products sourced from an illegal cracking location in Abia and handed over to the NSCDC.

“This kind of activity can lead to bleeding of the Nigerian economy and certainly a nation striving towards development cannot afford to allow these kinds of things to be happening.

“We have detained them, and they have made worthwhile statements. We are also pushing further to ensure that all other people involved in the activities will be brought to face the law, so that justice can prevail.

“We will ensure that we get to the root of this case, as they will be prosecuted in the competent Court of law. Trusting that this will serve as a deterrent to all conspiring to engage in these activities. We promise the people of Nigeria that we will look into this case to the very end.

“We have 200 Cellophane sacks filled with AGO suspected to have been sourced from an illegal refinery location. Now the security patrol team who are always on routine patrol, accosted them on the road, and demanded to search.

“On searching, 200 cellophane bags were discovered filled with suspected stolen products. Illegal refined oil are products of oil theft and this must not be allowed to continue. Even the degradation that it does to the economy is unbearable and it is a problem for the country,” Majekodunmi said.

The commandant added that the action was a contravention of the Nigerian constitution and the NSCDC is committed to ensuring that the nation is free from vandalism.

He warned that it would no longer be business as usual for vandals as the corps would definitely take necessary actions to dig out more conspirators.

“We want the public to support our progress with credible intelligent information, so that we can actually execute our mandate and perform our constitutional duties and responsibilities.

“The Nigerian economy has a strong presence in the oil industry. We have to protect this industry because it is a strong national asset and that is one of the advantages that we have as a nation.

“We want to tell the Nigerian people to shun illegalities and crime as NSCDC will not tolerate such activities. May God continue to bless Nigeria,” he said.

Majekodunmi called on security personnel, especially those at the border posts to be more vigilant, and be on alert to contain the antics of criminals to keep the state and nation safe.