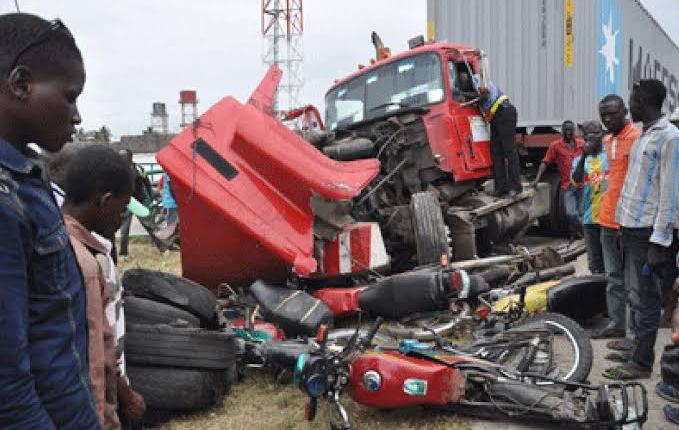 A 65-year-old man, identified as Papa Elijah, lost his life after he was knocked down and crushed by two trucks in Abakaliki, Ebonyi state capital.

It was gathered that while one of the trucks hit the deceased and he fell, the other ran over him at the Aforezuna Junction on Tran-Saharan highway, in the Abakaliki Local Government Area of the state.

According to an eyewitness, who spoke on condition of anonymity, while one of the drivers escaped, the other stopped and handed himself to the police, PUNCH reports.

“Papa Elijah was crossing the expressway to buy kerosene in a filling station located on the highway when two speeding trucks competing for space ran into him. One hit him and he fell, while the other ran over him and crushed him.

“Shortly, a team of policemen came to the scene and the man’s body was taken in an old roofing sheet, because he was crushed beyond recognition. The man was identified with only the clothes he was wearing when he left his house to buy the kerosene,” he said.

The source further said Elijah made Otapiapia (a local insecticide) to fend for himself and his family, adding he was to buy kerosene with which he produced the mixture, before he was killed by the trucks.

The policemen later moved the truck whose driver stopped when the tragedy occurred to their station.