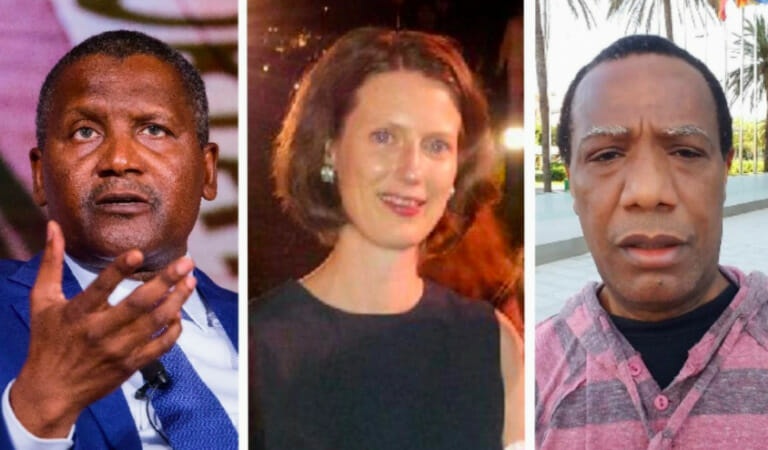 According to Court Documents, Ajenifuja disclosed that Dangote reportedly made arrangements to drug his wife and got youngmen to sleep with her with the intention to steal his business trade secrets.

Mr. Ajenifuja had developed the technique and process of a sector exchange-traded funds for Africa in June 2004, after over 10 years of research. The project reportedly drew the attention of Mr. Dangote.

The businessman, in his court filings on August 2nd 2019, alleged that Dangote connived with some World Bank Group employees, precisely on February 8, 2010, to invite his then wife to a meeting at a Catholic mission in Washington, D.C., area where she was allegedly given illicit drugs.

The wife, Anita was given opioid medications daily subsequently becoming addicted to them. She engaged in extramarital affairs with young men in Washington and this was used to blackmail her into turning against her husband.

Nigeria among top 10 countries responsible for 75% of gas flaring…

She eventually handed over his trade secrets to Mr Dangote.The World Bank has since denied the allegations and the court rejected Mr Ajenifuja’s lawsuit because it was statute barred.

The lawsuit also stated that Mr Dangote resigned as the President of the Nigerian Stock Exchange in 2014, a year before the expiration of his term, “to conceal his involvement,”.

“On information and belief Defendant Dangote resigned to conceal his involvement in what happened to Plaintiff and Anita Koepcke,” Mr Ajenifuja said in court documents.

Mr Ajenifuja said it was around December 20, 2014, that he searched for the missing copies of the trade secrets and suspected that they had been stolen by Mr Dangote via Anita.

He alleged that the trade secrets were sold to Vetiva Funds Managers Limited, Lagos, one Mr Dangote had a close business relationship with.