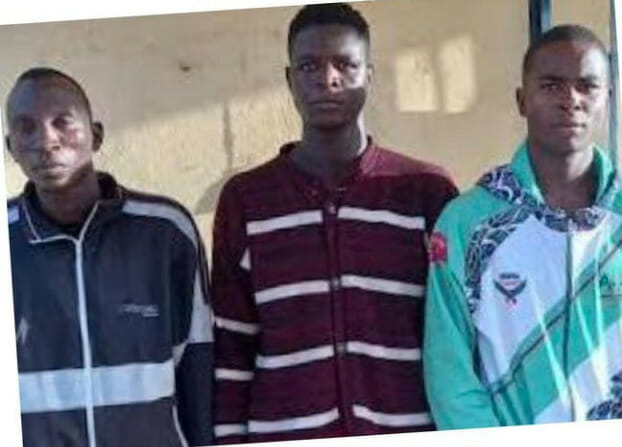 The Adamawa State Police Command has arrested three in connection with the death of an ND2 student, Franca Elisha of the Department of Library Science, Federal Polytechnic, Mubi.

WITHIN NIGERIA gathered that Franca Elisha, who was impregnated by one of the suspects, Muniru Abubakar, her boyfriend, killed her to conceal the illicit affair between the two of them.

It was later revealed that Muniru Abubakar alongside his two accomplices, Huzaifa Shuaibu and Rabiu Adamu reportedly connived and gruesomely murdered Franca Elisha and buried her in a shallow grave, after which they went about their normal academic activities pretending as if nothing happened.

The suspect confirmed to have impregnated late Franca asking her to abort the pregnancy upon hearing. According to the police, he took the deceased into his room located at a students’ community behind the State University, Mubi, for the abortion on the 6th August 2021 and invited his friend, Huzaifa Shuaibu who is a student of the College of Health Technology, Mubi, to carry out the abortion.

One of the suspects, Huzaifa was said to have administered an injection to Franca for the abortion after which she died. Sensing danger, Muniru Abubakar was said to have invited one of his other friends, a student of the Polytechnic, Rabiu Adamu, who conspired with them to bury the corpse in a shallow grave with her mobile phone, national identity card and other items that can expose the heinous crime they have committed.

The Father of the deceased, Mr Elisha Iliya, told Tribune Online that his daughter left home on that fateful day for school, but could not return and that they searched everywhere as well as made contacts, but to no avail. It was a friend that revealed the location of his daughter.