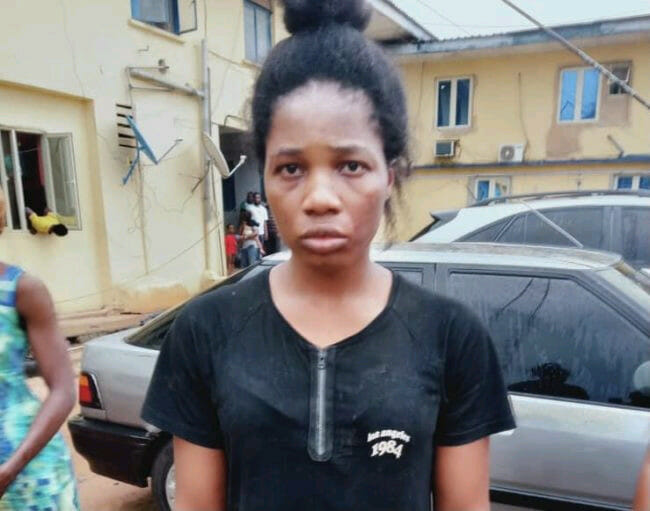 Precious Mmaduike, a 21-year-old househelp, has been arrested by operatives of the Edo State Police Command for allegedly abducted her employer’s two children in Lagos.

Spokesperson of the command, Bello Kontongs, who disclosed this in a statement on Saturday, August 28, said operatives rescued the victims, David Ibe, 4, and Chizaram, 2, both children of one Mr Ibe Phenasus of No. 31 Balogun kuku street, Aguda Surulere, Lagos State.

The statement said the housemaid was arrested along with two other suspects, Jane Osas, 35 and 45-year-old John Obasu.

“The abduction was planned and executed by Precious Mmaduike, who used her familiarity with the children as their househelp and abducted them from Lagos to Benin City, Edo State,  on August 23, 2021,” the PPRO stated.

“According to the complainant who also is the father of the children, at about 08:45hrs, his children were given N500 by his wife to buy biscuit outside the compound in Lagos in the company of their housemaid,

“They waited for them to return but they were not forthcoming. The phone of the housemaid was switched off, all efforts in search of the children and housemaid proved abortive. That was when the father immediately reported the situation to Aguda Police Station, Lagos, where it was discovered that the last location of the housemaid before she switched off her mobile was in Benin city, Edo State

“The complainant decided to come to the police in  Edo State for assistance. Men of the Anti-Kidnapping and Cyber Crime Unit of Edo State Police Command immediately commenced investigation

“With the aid of the information gathered from the origin of the abduction and field assets,  the abducted children were rescued on 26/08/2021 at about 1730hrs by the operatives of the Edo State Police Command, Benin city in a very remote area at Upper Ekewan Road, Benin City with the housemaid and a woman she came to visit with the children

The woman had bought gift items and other properties for the children and are currently with the police, Kontongs explained.

The PPRO added that “while the operatives were on their way to the state Command in Benin city with the rescued children, the suspects and two other children found in the house, the husband of the woman, one Joseph Obaze  raised alarm of kidnapping against the police operatives which attracted a group of unknown vigilante members who blocked the road”

“The Police operatives identified themselves to the unknown vigilante group but they went ahead to attack the police operatives with all kinds of weapons, causing bodily injuries to some policemen.”

“Before reinforcement could arrive at the scene, the vigilante group had escaped to an unknown destination. Efforts are in place by the command to apprehend the vigilante leader and his gang members that attacked the police operatives,” the statement disclosed.

The statement added that the Commissioner of Police enjoined all law abiding members of the public to go about their lawful businesses, noting that the command would not allow miscreants in the name of vigilante group to take over the public space.

“For the police to achieve its mandate of protecting lives and property, the CP enjoins the public to continue to provide useful information to the police about criminals and their activities.”