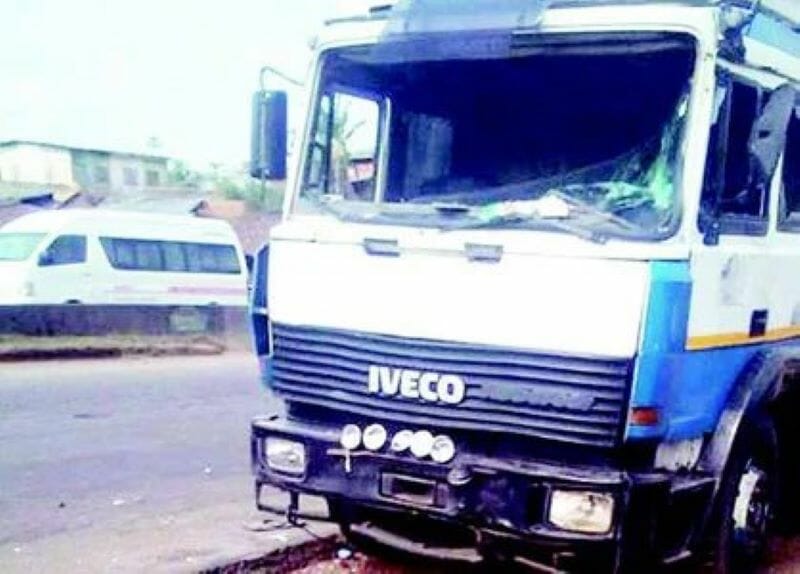 Angry youths attack a driver after a truck crushed a motorcycle rider, popularly called okada man, to death along the Akpajo axis of the deplorable East-West Road in Eleme Local Government Area of Rivers State on Sunday evening.

According to eyewitnesses, the okada rider was trying to maneuver his way through one of the bad sections of the road near the Indorama Eleme Petrochemical Company before meeting his death.

They said while attempting to overtake the trailer, his motorcycle suddenly climbed a stone, wherein he missed its track and rolled backwards, under the tyres of the trailer which crushed him and shattered his brains.

PUNCH reported that all that was left at the scene was the gory sight of blood stains and the brains of the late okada rider, as travelers and passers-by held their heads and hands in awe.

Meanwhile, the truck driver escaped death by the whisker, as some youths who were angered by the death of the man almost descended on him, but for the intervention of a naval officer.

The operative who simply gave his name as Ahmed narrated how he rescued the truck driver and handed him over to the police.

“After the man died, some people inside the park tried to attack him. I was the one that asked them to stop beating him. If they kill him, that will be another matter. I took him to the station at Akpajo division,” he added.

The death of the okada rider is coming five weeks after youths of Eleme and their sympathizers suspended a week-long protest over the bad section of the road, following assurances by the federal government through the Ministry of Niger Delta that work was going to commence on the road.