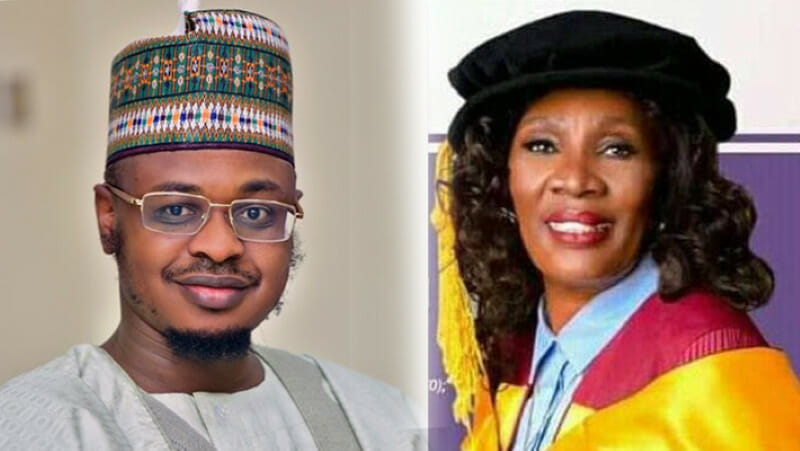 Renowned Nigerian columnist and blogger, Farooq Kperogi has reacted to an advertorial placed in the Daily Trust by Zamfara State governor, Bello Muhammad Mutawalle to congratulate the Minister of Communications and Digital Economy, Isa Ali Ibrahim Pantami on his “promotion to the Rank of Full Professor of Cybersecurity” by an unnamed university.

In an article published by Peoples Gazatte, Kperogi stated that he learned that Pantami’s “professorship” was granted by the Federal University of Technology, Owerri, where he has never taught, adding that the minister is not qualified to be appointed professor by any university in the world because he does not teach, research, or render service at any university now.

He wrote” If Pantami can bludgeon a university into “promoting” him to the position of “professor” even when he has zero formal association with it, he can cause it to do anything.

“But to pretend to be a “professor” when he isn’t qualified to be one—and when he doesn’t teach and has never taught at the university that conferred the position on him—is the sort of self-debasing fraud a religious leader shouldn’t be identified with.”

In differentiating between professorship and honorary doctorates, the media scholar said; professorship “is the crowning accomplishment and the highest professional rank that is bestowed on people who teach and research at a university.”

According to Kperogi, “in the advertorial, Matawalle repeated the dishonestly hyperbolized claims Pantami cherishes and promotes, such as the claim that he has over 160 publications—which don’t show up in any scholarly repository—and that he was trained at Harvard, MIT, and Oxford even though he only attended a few days’ workshops there.”

Explaining Pantami’s academic position before he left the teaching profession, Kperogi stated that “The last academic position Pantami held before he became DG of NITDA in 2016 was an assistant professorship (roughly equivalent to a senior lectureship in the Nigerian system) at the Islamic University of Madinah where he taught for two years after his PhD in 2014.

“Before earning his PhD in the UK, he taught at the Abubakar Tafawa Balewa University (ATBU) in Bauchi as a junior lecturer. At no point in his academic career did he ever teach at the Federal University of Technology, Owerri. So, only ATBU or the Islamic University of Madinah could have legitimately promoted him to the position of professor.

“But he couldn’t possibly be promoted to professorship at the Islamic University in Madinah because, having terminated his contract with the school to take up a government appointment, he is no longer in the school’s employ. Plus, his last rank at the university was an assistant professor.

“At ATBU, he was either a Lecturer II or a Lecturer I—or perhaps an assistant lecturer— before he left the school for his doctoral studies. To become a professor there, he would first need to be promoted to a senior lecturer and then a reader (which is called Associate Professor in the North American system) before becoming a professor.

The 48-year professor described Pantami as a “professor” who doesn’t profess, who doesn’t teach, research, or render service at the university that supposedly conferred the title on him.”

He added that; “As a religious cleric whom many young people look up to, Pantami should know better than to perpetrate fraud, promote it through third parties, and then swank it himself with unabashed hauteur. If he has any honor and really desires a professorship, he should disclaim this fraudulent “professorship” and earn it the right way.

“After his tenure in 2023, he should go back to either ATBU or the Islamic University in Madinah and spend at least six to eight years teaching, researching, and rendering service. Then he might legitimately earn a professorship. Different universities have different criteria for promoting academics to the position of professor. Some prioritize teaching over research. Others prioritize research over teaching. Still others strike a happy balance between the two.”

Advising Pantami on what to do to obtain the rank of professor, he wrote; “If he is too impatient to follow the conventional route to professorship, he can get the Federal University of Technology, Owerri, to make him a professor of practice in cybersecurity AFTER his ministerial tenure. This will, of course, require him to relocate to Owerri and actually teach students there. Professors of practice don’t have to go through the traditional protocols of academic promotion because it is their industry experience, not their scholarship or pedagogy, that is the basis for their employment.”