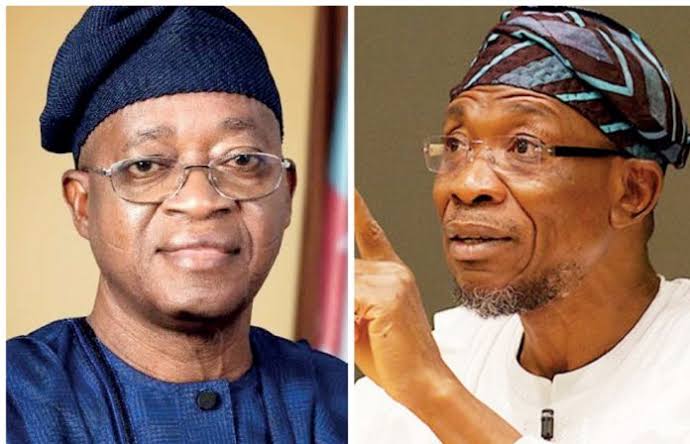 The political battle between aides of the Minister of Interior, Rauf Aregbesola and Governor of Osun State, Adegboyega Oyetola which started as an ‘attempt to grab powers of the ruling party (APC) has taken a new dimension despite moves to reconcile aggrieved members in both camps.

Former Osun commmissioner for home affairs, Sikiru Ayedun while addressing aggrieved members of the ruling party (APC) under the aegis of Osun Progressives (TOP) at Oranmiyan House, Gbongan Road, Osogbo on the state of Osun debts alleged that the sum of 48 billion has been refunded by the federal government to Osun state treasury as refund for federal roads constructed during Aregbesola led administration.

The statement credited to the Ife-born politician and a leader in the Osun Progressives (TOP), Sikiru Ayedun reportedly set tongues waggling. Loyalists of the Osun Progressives (TOP) claimed that the statement is true and wondered why the state government did not acknowledge the said development which probably have assisted the runnings of the state. But many supporters of Ilerioluwa, another group in the APC inarguably loyal to the governor have criticised and strongly condemned Sikiru Ayedun, describing his statement as false.

Reacting to the claim by a former Commissioner for Home Affairs, Sikiru Ayedun, the Osun State Government through its Commissioner for Finance, Bola Oyebamiji disclosed that Oyetola led administration has not received the sum of N48b from the Federal Government as refund on federal roads constructed within the State.

Oyebamiji who also described Ayedun’s claim as untrue, misleading and capable of creating disharmony, strife and bad blood within the progressive family said the total contract sum is 38bn and wondered how possible it is for the FG to make a refund that was far above the contract sum.

The finance commissioner said the total refund by the FG to the state as at today, in three tranches, stand at N11.9bn based on the project delivered by the contractors.

According to the commissioner, the refund was expended on four road projects inherited from the previous administration as against claim by Mr. Ayedun that the refund was being used to pay full salaries to civil servants in the state.

Oyebamiji urged well- meaning Osun citizens to endeavour to verify all information before publication and dissemination to ensure a peaceful and healthy political atmosphere for all and sundry.

He said: “The total contract sum of all the federal road projects embarked upon by the Osun State Government, as approved by the Federal Ministry of Works, is N38 billion. It therefore stands logic on its head to claim that the sum of N48bn will be paid by the FG for projects whose total contract sum equals N38bn. The last time we checked, the federal government is not a Father Christmas.

“The projects in question, as at November 2018, on the average, was less than 35% completion. Available records show that the Osun State Government awarded the 29km Gbongan – Akoda dualization project in 2013 for N29bn while the 40km Osogbo – Ikirun – Ila Odo Kwara boundary was awarded for N17.5bn in the same year, making both projects to amount to N46.5bn as proposed by Osun State Government.

“However, after due diligence and thorough assessment by the FG Public Procurement Agency, the contract sum was reviewed downward thus: Gbongan – Akoda road at N23bn, and Osogbo – Ila Odo road at N15bn respectively to carry the approved award contract sum of N38bn for all the ongoing FG roads under construction. This review was duly communicated to the Osun State Government.

“The implication is that the Osun State Government had paid both contractors the sum of N19.4bn as at November 2018. Similarly, the total refund by the FG to the state as at today, in three tranches, stood at N11.9bn based on the project delivered by both contractors.

“It is imperative to state that the FG refund of N11.9bn has been judiciously utilized and ploughed back into four (4) inherited road projects embarked upon by the previous administration contrary to the unsubstantiated claims by Mr. Ayedun that the refund is being used to pay full salaries to civil servants in the state.

“It is also instructive to note that since the advent of Oyetola administration, additional 60km of road had been reconstructed and fully completed, with another 10 township roads presently under construction. These are expected to be completed before the end of 2021, including the Iconic Olaiya flyover.”