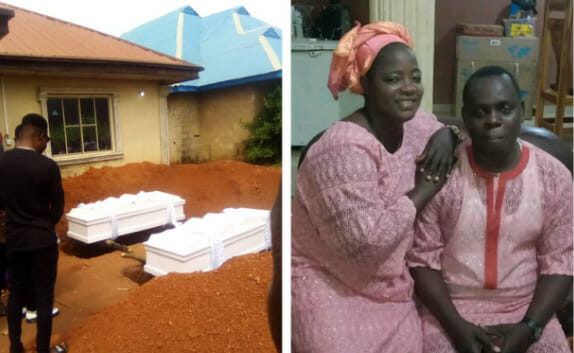 The Osun State Police Command said that it has concluded its investigation into the death of a couple in Ilesa last Friday.

The family had asked for a comprehensive inquiry into what caused their loved one’s death.

However, the command’s spokesman, SP Yemisi Opalola, stated that the deceased’s 25-year-old son requested a court injunction to prevent police from further investigating the case.

Recall that a couple, Olasunkanmi and Fisayo Eso, were discovered dead in their apartment last Friday.

The 12-year-old late couple’s maid, simply identified as Lara, who was said to have been living with them for three years was alleged to have poisoned the deceased.

The maid, it was gathered, was adopted by the couple at the age of nine and has been living with them till their death.

Opalola told newsmen that the deceased’s son insisted his parents did not die of poison but generator fume.

The police spokesperson said, “The family filled a court injunction to stop police from investigating the death of the couple. The son said his parents died of generator fume.

“He said the maid was not affected due to the distance of her room to the generator house. They said they didn’t want any autopsy to be conducted. So we cannot continue the investigation to ascertain the cause of their death”, Opalola explained.

However, the couple had on Thursday been buried at their residence, Ireti Ayo, Imose area of the town.