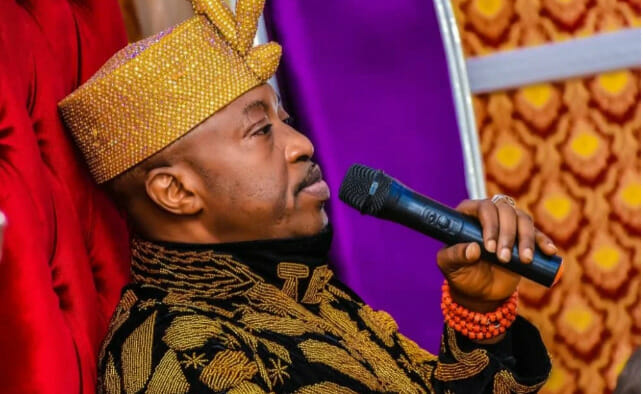 Oba Abdulrosheed Adewale Akanbi, the Oluwo of Iwoland, has characterized kings as God’s earthly ambassadors whose behaviour should exemplify true monarchy, with no place for alternate methods of connecting with God.

This is in addition to the monarch’s statement that idol worship is incompatible with monarchy.

Oba Akanbi, who fought the invasion of idolatry in order to subjugate the sacred emblem of God on earth, said that God is the basis of every crown.

Speaking through a statement made available by his Press Secretary, Alli Ibraheem, the Oluwo affirmed that idolatry was alien to kingship, noting that crowns are sacred, authoritative and the exclusive property of God.

According to the monarch, “God is the king, that means the palace where the king lives should be the house of God. The only odium and rival of God in that palace are the deities or idols. There cannot be two kings in a palace.

“Idols must not be in a king’s palaces. Go and tell the kings. You married a wife and she brought another man to the house, how would it be? That is what the kings in Yorubaland are doing to God. Yet, they are looking for God’s blessing.

“Our fathers who were monarchs who worshipped deities were wrong. I take a bold step to apologise for their mistakes. The damage deity worshipping by monarchs has caused us is monumental. I will lead the path to right the past mistakes in the Yoruba traditional system. We can celebrate our exceptional fathers, we must not worship them unless we want our children to worship us too.

“Idol worshipping is a strange religion to kingship. This is not about Christianity or Islam. It is a pure dictate of the Creator after creation. Kings as representatives of God prime responsibility of promoting His oneness from worshipping His rivals”, further stressing that only monarchs carry the same name with God, but the same monarchs are promoting His rivals.

“My royalty is synonymous with the one brought by the founding father of Yoruba crown (Oduduwa). Only God is the king. Oduduwa fought deity and won Obatala. The greatest of God’s name is ‘King’. No one else bears that name with him except monarchs. As such, we are just earthly representatives.”

He further said that kings are expected to respect the likeness of God and steer clear off His don’ts, which will cause direct access to him and unquestionable authority, noting that due to the promotion of His rivals (deities) by some kings, they are spiritually cut off by resigning themselves to static gods.

Oluwo explained that there is a need to illuminate all the monarchs in Yorubaland on their superiority over deities.