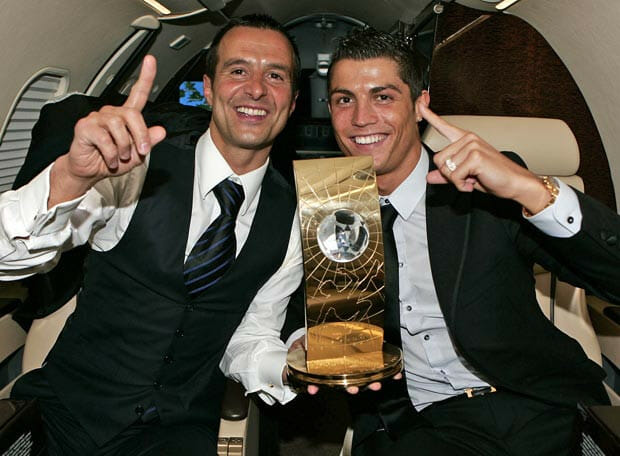 Cristiano Ronaldo’s agent, Jorge Mendes has declared that the player deserves to win the Ballon d’Or this year more than ever before.

Recall that Ronaldo, Lionel Messi, Robert Lewandowski and Jorginho have been nominated to win the prestigious award.

If he wins it, it will be the sixth time in his career and Mendes (who manages Jose Mourinho, Di Maria, Moutinho, Falcao and a host of top stars) feels he has done more than enough to win it despite winning only the Coppa Italia last season.

Mendes said to France Football : “The figures and statistics linked to the name of Cristiano Ronaldo speak for him and should be enough in my opinion for him to win another Ballon d’Or. The absolutely remarkable total of 115 goals for the Portuguese national team makes him the record holder in the history of men’s international football. This year he broke this 15-year-old record, to which he can add that to being the top scorer in the history of professional football.

“All these achievements, which represent the greatest performance in football history, should be decisive in the awarding of the trophy, as he continues to demonstrate that he is, without a doubt, the best football player in the world of all time.”

“He holds the record for goals in the Champions League and he is the only player in the world to have won everything in three different countries with the maximum competitiveness, as was the case in England, Italy and Spain.

PSG ‘reject the chance to sign Cristiano Ronaldo after talks…

Why coming 7th in Ballon d’Or shocked me – Mo Salah

“All this at the age of 36, with absolutely unique consistency, commitment and a phenomenal ability to overcome difficulties. In my opinion, this year the Ballon d’Or has a name: Cristiano Ronaldo. For me, he has never deserved it so much.”

Despite Juventus’ struggles in Serie A last season, Ronaldo ended the campaign with 29 goals, putting him five clear of the next top scorer Romelu Lukaku.

He also broke the record to become the highest-scoring player in international football this year with 115 goals for Portugal.

He is also the first player to have scored 10 hat-tricks at international level as he guided Portugal to a 5-0 win against Luxembourg.

Since his return to Manchester United, Ronaldo has scored five times in 7 matches across the Premier League and Champions League.