Days after news broke on social media about a couple; Bamise Samson Ajetunmobi and his wife Elizabeth both founders of Imagine Global Solution Limited, of allegedly stealing from investors, defrauding them of an estimated N22 billion, there have been another outcry by Nigerians on the social media platform, WhatsApp, calling out one Oyewole Prince Shalom aka Shallomine or Money Doctor of a similar fraudulent scheme.

WITHIN NIGERIA gathered that Oyewole, a suspected notorious Nigerian fraudster, lives and operates his many fraudulent schemes in Nigeria with a group of like-minded people who lure non-suspecting victims into joining their numerous Whatsapp groups with lies of getting grants and investing but end up scamming them.

According to an exposé by KemiFilani, after speaking with some of Oyewole’s alleged victims it was discovered that he duped them over 50 million naira which led to the sad demise of one Dr Florence Adaeze Abuah who reportedly was duped over 15 million naira by the suspect and his gang.

Below is a breakdown of how Oyewole Prince Shalom and his syndicate operate;

One of the victims told newsmen that Oyewole told them that the Money Doctor group, a Whatsapp group he (Oyewole Prince Shalom) created was a charity organisation for alleviating poverty, “Money doctor is a Charity organisation owned by one Dorcas of Dorcas foundation. The aim of the group is to alleviate poverty. That was what Prince Shalom told us” the victim said.

She continued “I was first added into the group in 2017. We were told to pay 10 thousand naira each for the logistics to get the grant, we all paid the money and we heard nothing for a while They then asked us to start sowing and reaping. People sowed monies ranging from one thousand naira to five million naira, but never got anything. It was like juju, we didn’t understand anything. One woman(Dr Florence Abuah) sowed and invested over 15 million naira but got nothing. Some sowed their rent, others borrowed money from the bank just to invest.”

When asked about the account number these monies were paid into, one of the victims said, “We paid the monies into a GT Bank account with account number; 0229143305 and account Name; Oyewole Prince Shalom. We also paid into another account number with the name; Blessing Achuenu Keonye and number; 0062667332 (Sterling Bank)”

After his operation with the Money Doctor Group ended, Prince Oyewole proceeded to open another Whatsapp group named, “Marinvest CBD Oil”, This time around, he took the scam game a notch higher. He opened a website (marinvest.co.uk) which promises to give investors “Up to 40% Monthly Investing In CBD Oil”, a clear LIE.

Below is a screenshot of his messages trying to convince members of the group to “Invest” into the FAKE Marinvest CBD oil platform showing his bank app details (with account name “Prince Oyewole, bank Zenith and account number; 2398418843)” 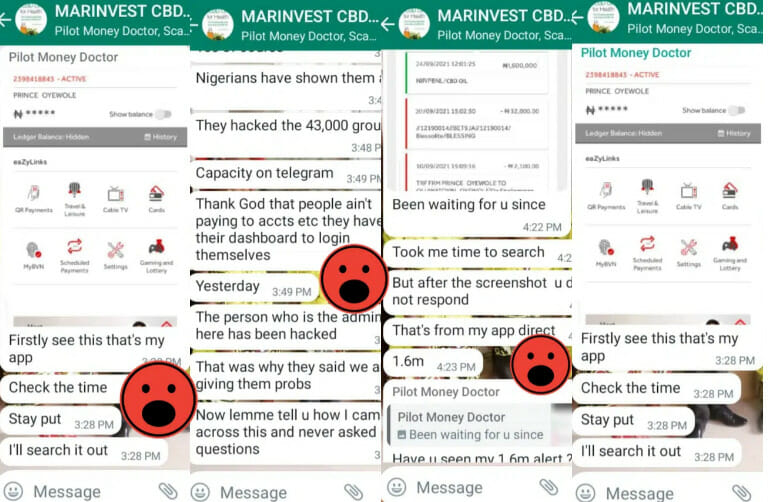 One Late Dr. Florence Abuah was one of their victims. She was duped over 15 million naira before her painful death. Dr Florence reportedly died after it was clear she had been duped by the money.

“Even after Dr Florence cried out to them about her money, they asked her to pay 20% of her total investment as tax before she could get her ROI. The poor woman was running around for the money before she died” One of the victims told newsmen. 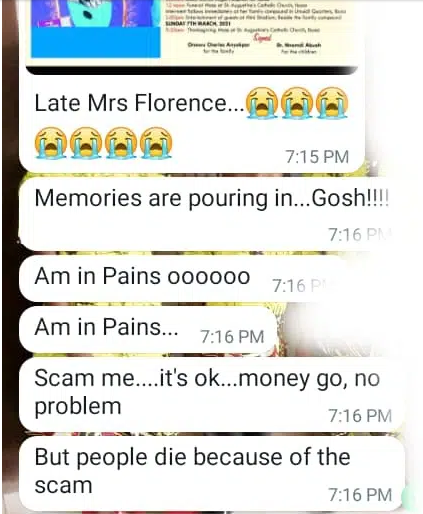 Before her death, Dr Florence was a Lady of St. Mulumba.

“I was not able to pay for my father’s surgery because I donated all the money I had with Prince Shalom. My father died because I couldn’t pay his hospital bill” One of the victim said.

“I lost my son because I was duped by him (Shalom). I couldn’t afford his medical bills.”

Oyewole Prince Shalom now claims he owns a school named, ” Da Shallomines’ Pedagogy International School” in Ibadan. He shared a purported poster and image of the alleged school to one of his victims, claiming her used the money he made from his CBD oil Investment website to open the school. He tried to convince his unsuspecting victim to invest into the school. See chat below: 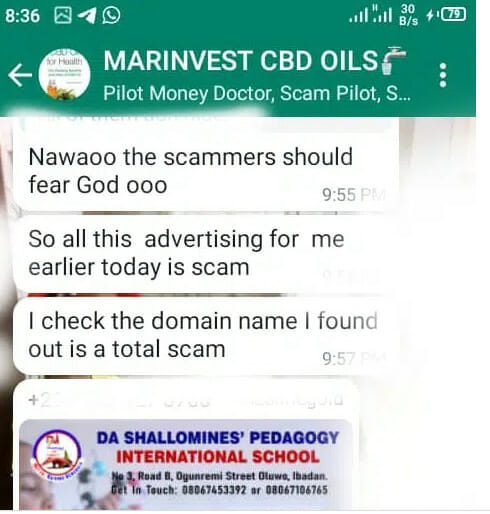 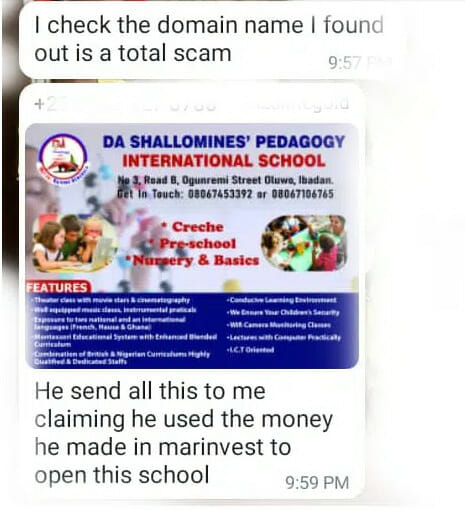