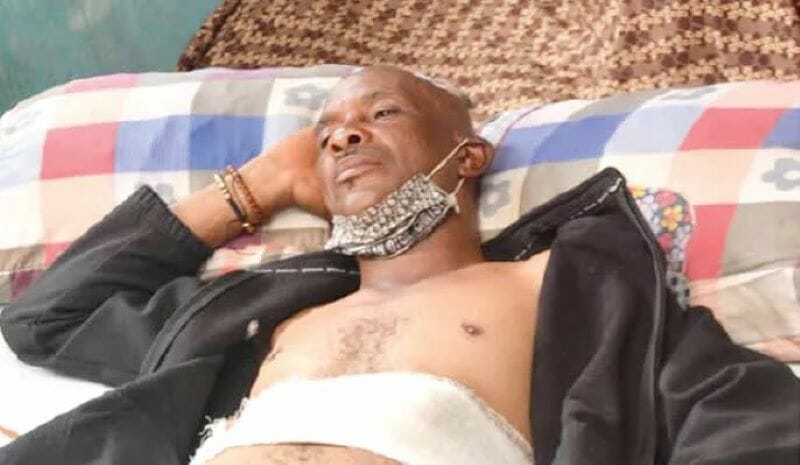 A paramilitary officer, Shina Edun, who was stabbed during the recent #EndSARS memorial protest at the Lekki Tollgate, has lamented his ordeal after the unfortunate incident.

Edun, detailed to guard the Lekki Tollgate during the memorial car procession was stabbed after tear gas canisters were fired by the police to disperse the protesters last Wednesday.

The security agent sought the intervention of the Lagos State Governor, Mr Babajide Sanwo-Olu, in the payment of his medical expenses.

Narrating his ordeal, Edun said he was stabbed while trying to protect the property of the Lekki Concession Company.

He said, “Around 11.30am last Wednesday when the police said all those who were protesting at Lekki Tollgate should leave, the person who was coming behind me stabbed me with a knife and before I could understand what was happening, I was rushed to the police hospital.

“The person that stabbed me was one of the protesters; those who were protesting to mark the one-year anniversary of #EndSARS.

“I was stabbed in my abdomen in front of the Lekki Tollgate. I work with LCC and I was attached to them from the Lagos State Ministry of Environment.”

The Chief Security Officer of LCC, Solomon Tolofari, who led some officials of the firm to Edun’s residence on Monday, noted that when the protesters blocked the road, the company had to drive against traffic to get medical help for the victim.

“We were there when the protesters came in Coaster buses. Suddenly, they disembarked and the Man ‘O’ War team, including Shina Edun, was asked to stay close to protect the plaza. Before we knew what was going on, they had stabbed him in the abdomen and we rushed him to the hospital,” Tolofari added.

The victim’s brother, Kehinde Yusuf, stated that he had been in pain since the attack.

He appealed to the Lagos State Government to come to the aid of the family.