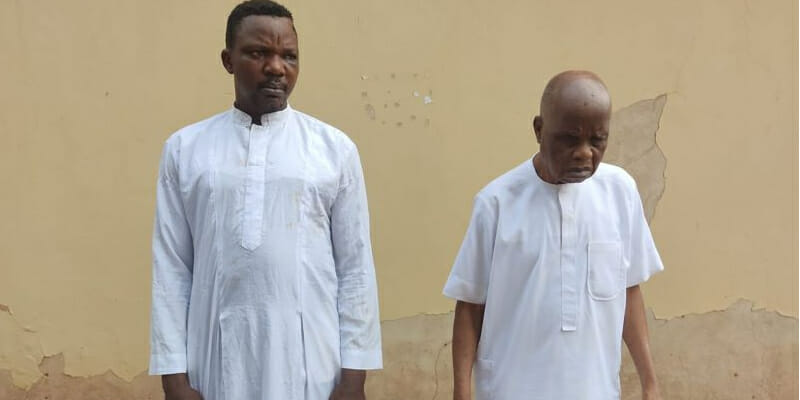 Enugu State Police Command has arrested a man and a blind pastor, Okeke Eneokwor  over the disappearance and murder of the man’s seven-year-old son for money ritual.

Spokesman of the command, ASP Daniel Ndukwe, who disclosed this in a statement on Thursday said the deceased was earlier reported missing on October 22.

Ndukwe said that following receipt of the information on the search for the missing child, police arrested his father, Onyishi Chidi (36), on Nov. 6 at Coal Camp, Enugu.

He added that Chidi was arrested for allegedly being responsible for the disappearance and murder of his son for money ritual.

“Chidi confessed to the crime and led police operatives to arrest a blind Pastor Okeke Eneokwor (95), whom he fingered as an accomplice.

“He also led police operatives and a medical team to a stream at Abakpa-Nike, Enugu, where the decomposing corpse of the minor was exhumed from a shallow grave,’’ he stated.

ASP Ndukwe also stated that the Commissioner of Police in the state, Mr Lawal Abubakar, had ordered a thorough investigation of the matter.

“The commissioner also directed the State Criminal Investigation Department to expedite action on the investigation to ensure the prosecution of everyone found culpable in the act,’’ he added.

He also called on residents of the state to remain vigilant, law-abiding and to promptly report criminals and their activities to the nearest police station.