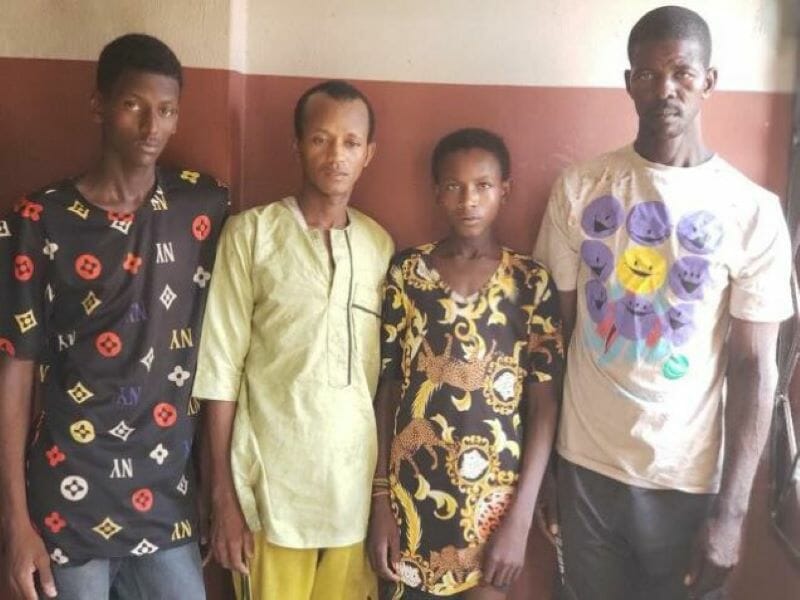 Four suspected kidnappers have been arrested by operatives of the anti-kidnapping unit around Era Forest in Ekpoma, Esan-West local Government Area of Edo State

The state police spokesman, SP Kontongs Bello, who disclosed this in a statement on Thursday said the suspects were all arrested on 26 November, 2021, in different locations in the forest.

“One of their victims who escaped from their den on October 20, 2021, (name withheld) identified Mohammed Umaru and Yakubu Liman to be part of the kidnappers who kidnapped him and two others, namely, Sunday Omojuanfo ‘M’ (40) and Idahosa Aigbe ‘M’ (45), who are yet to regain their freedom after the payment of N2.4 million ransom.

Bello also disclosed that operatives of the the Command during a stop-and-search operation along Benin-Lagos Express Road, flagged down one black Toyota Highlander SUV with Reg. No. LSD 748 CK, driven by one Abraham Usifoh.

Bello stated that the suspect was immediately arrested and detained in Ohosu Divisional Police Headquarters for onward transfer to State Criminal Investigation Department (SCID), for discreet investigation with the aim of unraveling the source of the ammunition and further arresting his accomplice(s), if any.

The Commissioner of Police, CP Philip Aliyu Ogbadu, has reinstated his commitment to a crime-free Edo State.

Ogbadu assured residents of the State that the Command will continue to do its best to ensure that criminals and their cohorts have no hiding place.AK-47 ammunition