2023: Southeast ready to kneel, prostrate to get presidency – Ezeife 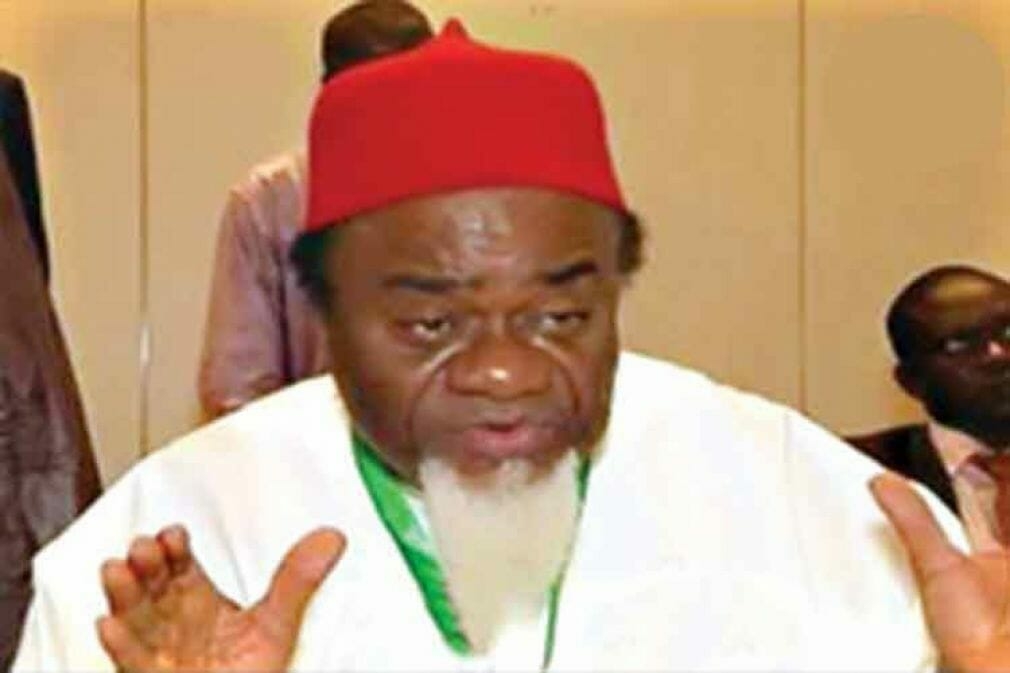 Chief Chukwuemeka Ezeife, a former governor of Anambra State, has stated that the Southeast is willing to bend and prostrate in order for other sections of the country to win the president in 2023.

Ezeife addressed at the United For Better Nigeria Initiative (UBNI) National Convention in Abuja on Saturday.

“It is not a matter of give us president, we don’t give, you have to work for it, the Igbo does not prostrate.

Ezeife stated that the Igbo people have made significant contributions to Nigeria’s growth in terms of infrastructure, intellect, and business.

As a result, he stated that it was time to give the Igbo people the opportunity to create Nigeria to the standard that God desired.

Ezeife went on to say that God created Nigeria to become a superpower among nations and to increase respect and dignity for all black people on the planet.

He stated that one of the methods to fulfill the nation’s goals was to transport everyone without distinction.

“So I found Hausa, Yoruba, Igbo and other groups in this place talking about the need for federal character. If you do it that way, there will be unity, if there is fairness, equity, justice, you will have unity and progress.

Also speaking at the event, former Secretary to the Government of the Federation, Anyim Pius Anyim said it is neither a right nor was it legal for the southeast to demand presidency.

Anyim, who recently declared his ambition to contest for the 2023 presidential ticket of Peoples Democratic Party, PDP said the southeast h to persuade other regions to support their dream if they would produce the next Nigeria’s president.

“Is it right for the Southeast to produce the next president?, my answer is legally no, and the reason is that the constitution is clear, the constitution says every Nigerian of 40 years is entitled to aspire for that office.

“On the other side, morally is it right? is it an entitlement? I will say yes because the federal character principle enshrined in the constitution encourages rotation.

“The reason I have to make this clarification is that when the right you have is not legal, the only approach and the instrument you have is persuasion.

“So the approach, the language will be to persuade others to see reason with you that morally they should support you to take a turn since it rotates.”

Anyim therefore encouraged the Southeast that as they go ahead with the movement of advocating for a president, it should be with an altitude persuasion.

The Guest Speaker, Prof. Mutiullahi Olasupo, who is the Director of Institute for Peace Leadership and Development Studies, University of Abuja, said that it was right for the southeast to produce the next president in the interest of peace and natural law of justice.

He said it was imperative for all Nigerians to exclusively resolve that the presidency in 2023 should go to the southeast.

He said that the same mechanism that produced former President Olusegun Obasanjo in 1999, should also repeat itself by 2023, to produce a president from the south east.

“Does that mean that the south east is not being recognized as a geopolitical zone in Nigeria?” he asked. (NAN)

Mrs Nkolika Mkparu ,Coordinator-General, UBNI, said that there was a feeling of political marginalisation after over a century (by 2023) the Southeast region is yet to produce a president.

Mkparu said that UBNI, a non-partisan political advocacy group, which had been involved in enlightenment for a united Nigeria deemed it fit to beam searchlight on the issue.

She said that in achieving this political balance, the support from the Southeast region alone would not suffice, therefore there is the need to appeal to other regions to support it.

“All the other parts have tried, south south has tried, north has tried, west has tried since over 50 years now, so we are hoping that we should be allowed to try.”

2023: Southeast ready to kneel, prostrate to get presidency – Ezeife