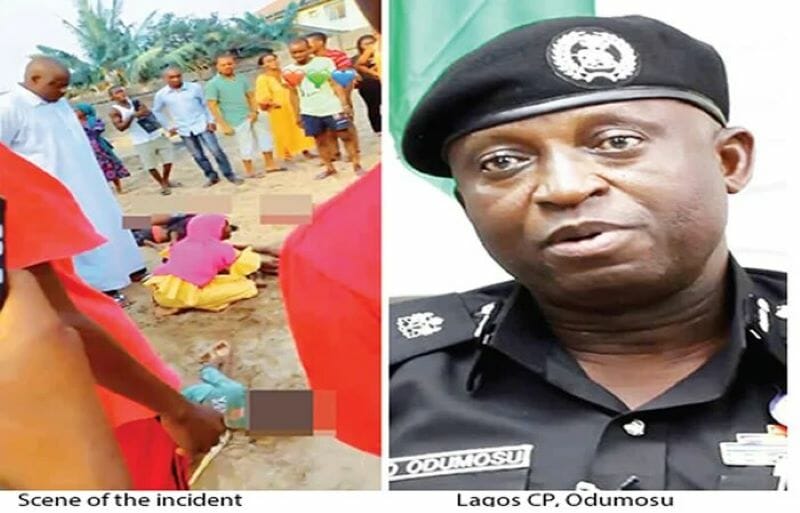 The corpses of eight minors have been recovered from a Honda Sport Utility Vehicle parked on Adelayo Street, in the Jah-Michael area, Badagry Expressway in Lagos State.

It was gathered that the vehicle was parked in front of a house where the victims entered it on Saturday, December 4, 2021.

The children were said to be playing inside the SUV when they mistakenly locked themselves in as efforts to unlock the door proved abortive.

A parent, while searching for the children, found their remains inside the vehicle and raised the alarm, which attracted other parents and residents.

The victims were identified as Mamod, Aisha, Zainab, Farida, Yakubu, Tayab, Wahab and one other.

A video clip recorded shortly after the victims’ corpses were recovered from the vehicle, showed their remains lying motionless on the floor.

Residents called for an investigation to ascertain the circumstances surrounding the death of the children.

The state Police Public Relations Officer, CSP Adekunle Ajisebutu, in a statement on Sunday, said the state Commissioner of Police, Hakeem Odumosu, had ordered a probe into the incident, adding that the corpses had been deposited in a morgue.

He said, “The eight children while playing were said to have mistakenly locked themselves in an abandoned car. Their bodies have been recovered and deposited in the Badagry General Hospital’s morgue for autopsies in order to determine the actual cause of death.

“Notwithstanding the report made to the police, the Commissioner of Police, Hakeem Odumosu, has ordered a thorough and speedy investigation into the circumstances surrounding their death. The CP also commiserates with the families of the victims.”

According to PUNCH, a consultant family physician at the Lagos State University Teaching Hospital, Ikeja, Dr Oluwajimi Sodipo, said it might take between six and eight hours for the children to die from asphyxiation or excessive heat.

He noted that an autopsy, including a toxicology test, should be conducted on the victims to ascertain the cause of death.

Sodipo said, “There are many determinants to the loss of oxygen in the vehicle. The number of children in the vehicle; because apart from the oxygen that will come in, the longer they stay inside the vehicle, they will also be providing carbon dioxide, which will be building up over time. So, the more people they are, the more that will build up, and of course, it could cause that.

“Another factor is that it is also dependent on what time the incident happened. One assumption is that they might have died from asphyxiation; another possibility is that if there is a lot of heat as the weather is hot right now and we don’t know what time the incident occurred, if they were trapped in the vehicle for a long time, there is a possibility of complications from excessive heat.

“Like heatstroke, dehydration, and all that can occur. But on a rough estimate, I will assume that at least it will take more than six to eight hours for all of them to have died within the vehicle, but that is also dependent on a number of factors.”

Sodipo, while urging parents and guardians to monitor their children closely, advised that the child protection services in the country should be strengthened.