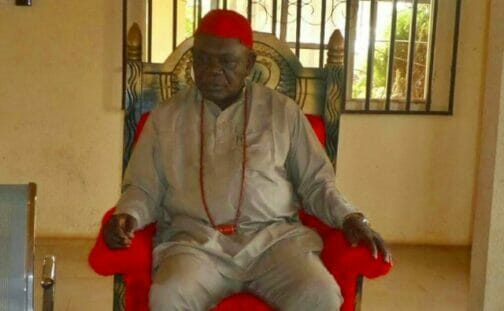 Michael Mbanefo Ogbolu, the Ogoani of Okpanam and the traditional monarch of Okpanam Kingdom, has been detained by police over a land dispute.

Armed men in a Toyota Sienna snatched the monarch away from worship on Sunday and drove him to Abuja.

Dominic Anyasi, a senior official in the palace, established a 24-hour deadline for the monarch’s appearance.

Steve Okonta also expressed his disappointment because the entire community had been looking for the king without luck.

Okonta said the manner the king was whisked away was a slap on the face of the entire Okpanam community, insisting that “our ancestors cannot forgive whoever is involved.

Residents in the community speculated that the monarch was kidnapped.

Spokesperson of the Delta State Police Command, DSP Bright Edafe, however, denied that the monarch was kidnapped.

He confirmed that the monarch was arrested by operatives of the Force Criminal Investigation Department (FCID).

DSP Bright, however, did not clarify why the monarch was arrested.