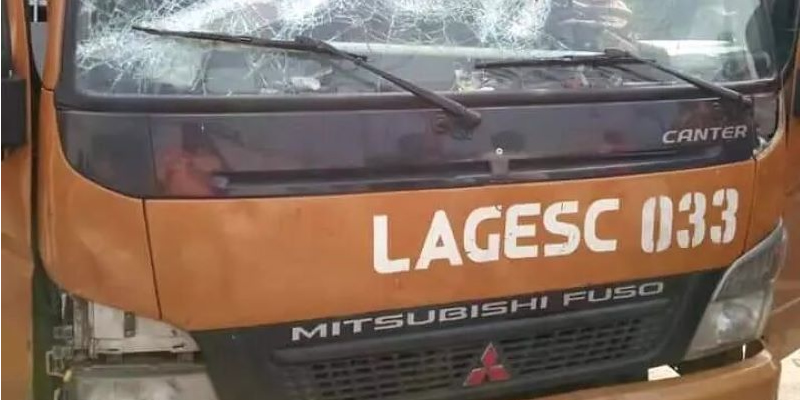 Suspected hoodlum stabbed an official of the Lagos Environmental Sanitation Corps LAGESC, at Ketu–Alapere area of the state.

The incident occured at about 3pm on Friday, while LAGESC men were on official duty in the area.

According to Vanguard, the 29-years-old suspect identified as Aminu Ahmed, was apprehended on Aminu Street in a bid to dislodge illegal traders, hawkers and cart pushers in the area.

The Corps Marshal of the Agency, CP Gbemisola Akinpelu (retd) who confirmed the incident said, ‘‘while on operation, men of our Special Squad were attacked and one Aminu Ahmed, 29 from Kwara State and a resident of the area who stabbed our officer was apprehended.

“The activities of hoodlums who attack our officers on lawful duty is one too many and we remain unfazed by the activities of these evil elements who hurled projectiles at our operational trucks’’.

The Corps Marshal revealed that the suspected hoodlum stabbed one of the officers in the neck but for timely medical intervention, it would have resulted in death.

Plateau: 25-year-old man stabbed by his fiancée says he still wants to…

Akinpelu further revealed that other miscreants that attacked the officers fled the scene as Ahmed remains the only one apprehended while a manhunt has been launched for the rest.

She stressed that the suspect has been handed over to the Nigeria Police for investigation and subsequent prosecution as he will be made to face the weight of the law and pay for damages meted out on the Agency’s operational trucks.

She finally reiterated the Agency’s commitment to ridding the State of environmental nuisances remains unshaken despite the activities of evil elements and warned members of the public to desist from attacking environmental enforcement officers on lawful duty as it contravenes the laws of Lagos State.