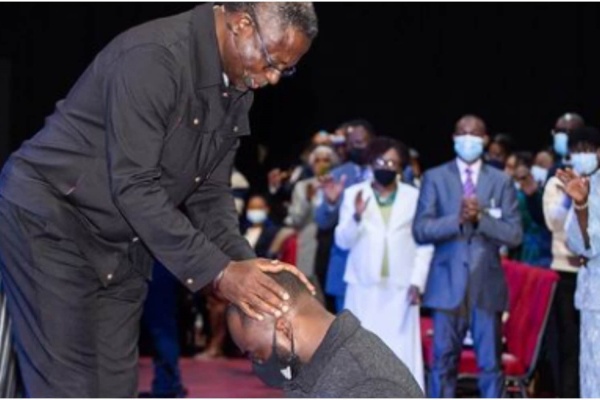 Pastor Matthew Ashimolowo, the founder of the Kingsway International Christian Centre, has appointed his first son, Tobi Ashimolowo, as Resident Pastor 2 of the KICC in London.

This is as he briefly hinted at his own ‘retirement’.

Tobi will be assisting his mother, Yemisi Ashimolowo, who has been the resident pastor at the church for a long time.

A video posted on the Facebook Page of a Christian platform, Church Gist, on Sunday, showed Ashimolowo making the announcement to the excitement of the congregation.

He prayed that his son will be anointed and favoured by God, and that God will use him to draw his own generation to God, and to shake systems.

Tobi is one of Ashimolowo’s two sons. He founded the Vault, a high-end store for men’s wear and accessories.

The KICC is a Pentecostal church which has branches in Europe, America, Africa including Nigeria. It started in North London in 1992 by Reverend Matthew Ashimolowo.

According to the KICC website, the church is “the largest growing church in Western Europe”. The church claims that it builds its members by investing in “the socio-economic and spiritual needs of multi-cultural communities and our overall desire and commitment to live our lives based on the teachings of Jesus Christ”.