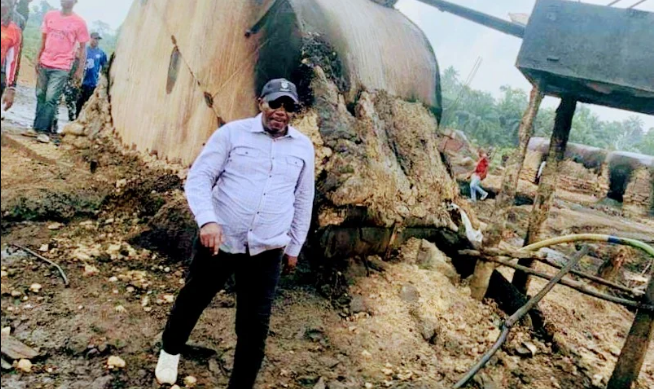 Daniel E.O Daniel, the Chairman of Abua/Odual Local Government Area, has declared that his administration will not condone activities of artisanal crude oil refineries.

This is as he revealed that he will demolish all illegal oil bunkering refining sites in the LGA, as directed by the State Governor, Nyesom Wike.

Speaking during a visit to one of such illegal refineries in Odau community, Daniel commended Governor Wike for his relentless pursuit towards bringing an end to the menace called black soot, which is threatening the existence of the people in Rivers State.

He added that the practical steps taken by the Governor within the last few weeks is yielding result.

He said, “Sir Daniel ceased the opportunity to caution those who play politics with the fight against Soot in the State to desist forthwith. He further added that it is not proper to politicise this all important issue which is causing harm to the environment and killing our people slowly.

“Mr Chairman called on all indigenes and residents in ABUA/ODUAL LOCAL GOVERNMENT AREA to join forces to nip in the bud the danger posed by the Soot.

“The ABOLGA Chief Executive finally opined that anyone with useful information about Locations and Names of Bush where any illegal Oil bunkering refining activities are taking place within the Local Government should report with immediate effect, to him or the DPO of the Abua/Odual Divisional Police Command and necessary actions will be taken.

“He disclosed that as the Chairman of Council, he has knowledge of all forests/communities in the LGA and that his administration will leave no stone unturned in implementing the directives of the State Governor to the letter.

“The site visited in Odau Community has over 15 Boiling point and occupies an estimated geographical Area of over one hectare of Land. It is bounded with Communities from Ahoada West LGA of Rivers State and Communities from Ogbia LGA in Bayelsa State.

“Accompanied by the Chairman is the DPO of the Divisional Police Command and his men, the C4i LGA Commander and his team of gallant men .

“Others are the Chief of Staff to the Chairman, Hon. Okpokipoiy Peters, Supervisor for Environment, Hon Vincent Reuben Obu, and his works counterpart Hon Zinami Fyneroad Iwariso, Special adviser on Interparty affairs to the Executive Chairman, Hon Alex Walters, who is an indigene of the Odau Community amongst others.