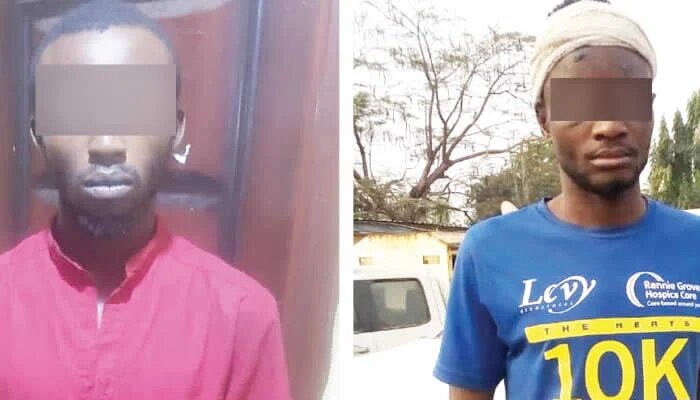 Two suspected cult members have been arrested by the police at separate locations and recovered stolen Hilux pick-up and a locally-made gun with live ammunition.

Police patrol team attached to the Epe division was said to have arrested one of the suspects, 32-year-old Adekunle Ojo on January 30 while driving the van along Epe-Ijebu-Ode Road.

The team was said to have been alerted to the stealing shortly after the vehicle belonging to a construction company in Epe was stolen from where it was parked.

According to PUNCH, police report revealed that the suspect had used a ‘master key’ to steal the vehicle in connivance with other accomplices still at large.

It stated, “Realising that the game was up, the suspect tried to escape but was promptly arrested and the vehicle recovered from him. Investigation has revealed that the suspect and cohorts have stolen several other vehicles using the same modus operandi. Investigation also revealed that the arrested suspect is a member of the dreaded Aiye Confraternity gang responsible for terrorising innocent members of the public in Epe and its environs.”

In another development, an alleged member of Aiye Confraternity, Ejiofor Apeh, 27, was reportedly arrested in the Trinity area of the state with a locally-made cut-to-size single-barreled gun and one live cartridge.

He allegedly confessed that his gang was planning an attack on Buccaneer Confraternity, a rival cult group, when he was nabbed on January 28.

The state Police Public Relations Officer, CSP Adekunle Ajisebutu, who confirmed the two arrests said the Commissioner of Police, Abiodun Alabi, had directed that Ojo’s case be transferred to the Special Squad of the command for further investigation.

“Consequent upon his (Apeh’s) arrest, the CP immediately directed that the suspect should be properly investigated with a view to arresting other members of his gang. The two suspects will be charged upon conclusion of investigations.” Ajisebutu added.