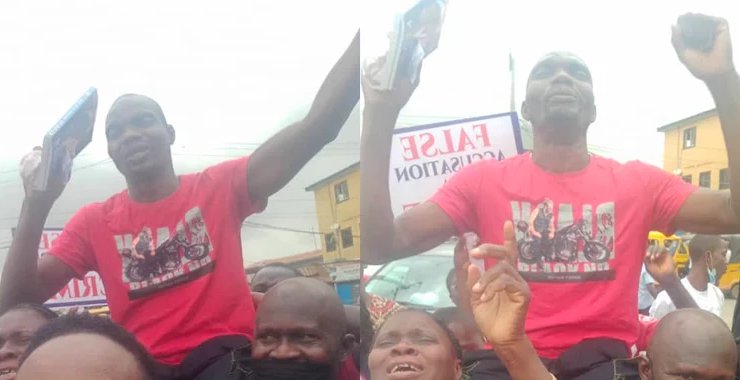 The release of Adewale Bakare, a schoolteacher accused of child molestation was celebrated on Thursday at the Ogba Magistrates’ Court in Lagos State.

According to the Punch, the instructor was confined in Kirikiri Prison since May 4 until his bail plea was granted.

However, in a phone contact with newsmen, Bakare’s accuser, Mr Adebisi Arewa, criticized his release on bail.

According to The Punch, teachers, parents, students, and previous students rushed the courthouse as early as 7.30 a.m. on Thursday.

There was also rejoicing on the grounds of Bakare’s school in Lagos State’s Sabo neighborhood upon his release.

A joyous crowd waited for Bakare’s arrival at the court for about two hours, holding placards and banners pleading with the court to release the teacher.

When the teacher emerged from the Kirikiri’s vehicle that brought him, he burst into tears as they sang victory songs.

Bakare, dressed in a red shirt and black trousers, thanked God and the people for their support during his “trial and tough times.”

Speaking with newsmen, Arewa said that the case was adjourned when he went to court today.

According to him, Bakare’s bail application was not debated.

He said, “How can that be? There are so many loopholes. I cry for this country. Anyway, he can only be released on bail and not freed.”

There had earlier been protests over Arewa’s allegation that Bakare sexually abused his nine-year-old daughter on the school premises.