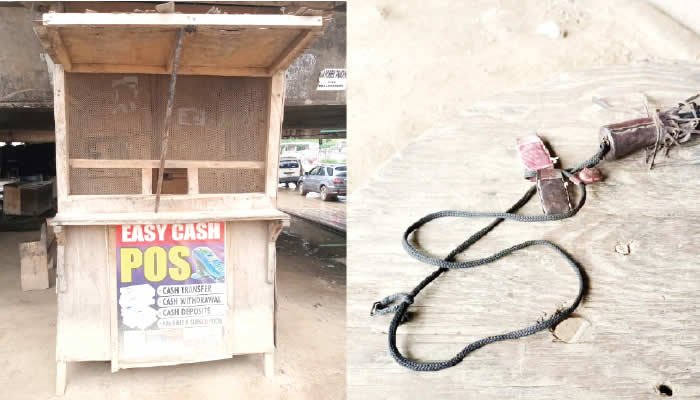 The incident happened around 11am on Sunday at the Underbridge area of Arepo, where the woman had a kiosk.

According to PUNCH, Adediran said one of the suspects was later caught by members of the Oodua People’s Congress (New Era).

Narrating how the incident happened, she said, “Around 11am, three men came to my stall to withdraw N1,000 and in the process of giving them the money, one of them came inside here and was speaking Hausa, which I did not understand. They confused me.

“Before I could get myself together, they went away, but left their ATM card behind. One of them came back to pick up the card. The money I put on my table was already missing, so when he came back, I held him and people gathered around us. He confessed that they were the ones who took the money.”

A leader of the OPC (New Era) at Arepo, Olayiwola Ogunsolu, said the suspect had been taken to the Warewa Police Station.

He said, “We saw Zainab (Adediran) shouting when the Okada man came and as we tried to intervene, we discovered that the man actually stole her money. He confessed that he did it with members of his gang, who are at large. We then took him to the Warewa Police Station.”

The State Police Public Relations Officer, Abimbola Oyeyemi, said he had yet to be briefed on the matter.