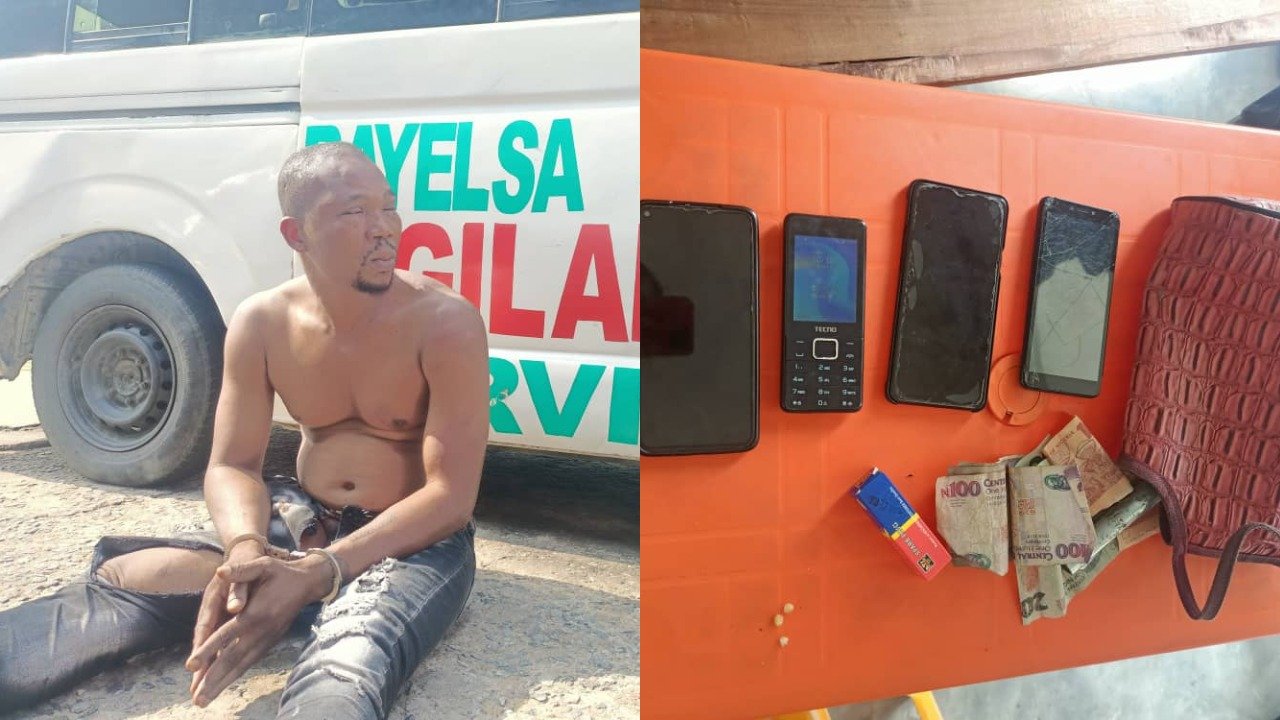 OBayelsa State Vigilante Service officers said they arrested a tricycle driver who robbed unsuspecting passengers of their valuables in Yenagoa, the state capital.

The 40-year-old male suspect, identified as Thankgod Godwin and hailing from Oghara in Delta State, was apprehended in the early hours of Monday by vigilantes stationed at the popular Tombia-Etegwe roundabout.

The suspect was apprehended after being identified and trailed by a victim whose phone was stolen by the suspect and his gang last week Thursday along the Alamieyeseigha expressway in Yenagoa, according to the state Vigilante Chairman, Hon. Doubiye Alagba.

He claimed that the suspect and his accomplice, one Keme, popularly known as Lion, who now resides in Biogbolo, are experts in pickpocketing and robbing passengers on tricycles (Keke).

But their luck ran out this morning when they were identified by a victim they allegedly stole from last week Thursday, and he was arrested while his Keke was set on fire by a mob.

One of their victims, Mr. Stanley Egwe, said “Last week Thursday, along the Alamieyeseigha expressway, I entered their Keke, he was the driver and one of his gang members sat beside me, we agreed that I’m dropping at Akenpai junction, but I was surprised when the driver stopped halfway and said he is not going anymore, that I should come down, but unknowingly to me his accomplice beside me had already stolen my phone.

“This morning, I was on my way work, at Akenpai junction, I saw these same boys inside same keke, I immediately followed them with another tricycle, thinking when we get to Tombia roundabout, I will see a police van at the junction and raise alarm, we got to the junction and there was no police van, I immediately ran into the vehicle of the Bayelsa State Vigilante members stationed there, and they quickly came to my rescue and one of them escaped while the driver was caught.

Kano: How vigilantes beat Qur’anic teacher to death for allegedly…

Hon. Alagba further disclosed that the suspect confessed that he has been in the business of pickpocketing for months, after learning the illegal “business” from Keme who narrowly escaped from the Keke. He also reportedly confessed that they operate on a daily basis.

Four phones and some cash were recovered from the suspect, which according to him was stolen that morning from commuters.

He has been handed over to the Ekeki Division of the Nigeria Police Force in the state capital for further investigation.