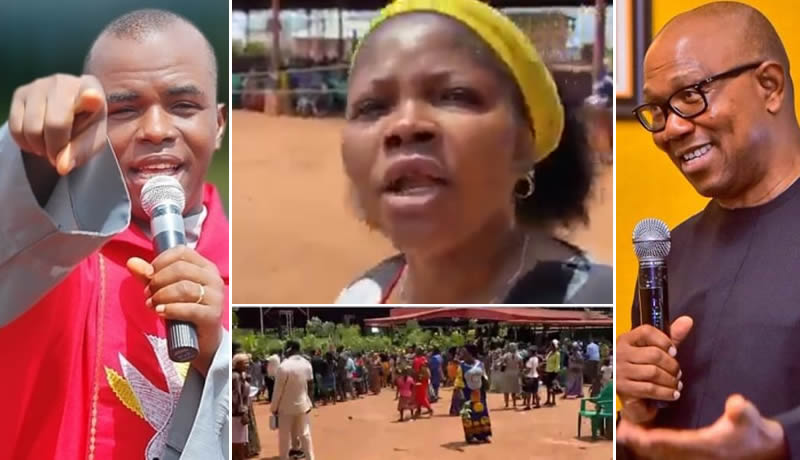 Worshippers at the Adoration Ministry have expressed their displeasure with the Catholic Church’s sanction following Fr Ejike Mbaka’s attack on Peter Obi.

Recall that Bishop Onaga issued a ban on activities at the Adoration Ground in Enugu on Friday. He said some of the teachings and utterances of Mbaka “are not consistent with the teachings and faith of the Catholic Church”.

Thousands of members of Adoration Ministry, Enugu have besieged the Adoration protesting against the suspension of the Director, Rev. Fr. Ejike Calistus Mbaka and subsequent closure of the ministry.

One of them was seen shouting, “No more bishop”.

The adorers were seen in their thousands carrying fresh palm fronts and shouting all sorts of unprintable words against the Enugu Diocese for allegedly “caging” their Director for “speaking the truth”.

One of the protesters, Miss Kenechi Ugwu told our reporter that ” I am not happy with this new development. How can you close a place like this. Do you know how many people that draw their inspiration, courage and power from this ministry? Nigeria is very hard and harsh now. Only this kind can give us the courage to move on in life.”

Miss Ugwu, a graduate of Enugu state University of science and Technology, ESUT stressed that ” I have been a member of this ministry since my undergraduate years. I finished since five years and I have not got work, but I know that God will do it. ”

Another who spoke to our reporter said that his brother has been working with Aqua Rapha bottle water and feared that with the present condition of the ministry, the company may be thrown into low patronage and subsequent closure as well.

Watch video from the protest:

Mbaka drew the anger of his superiors after damning comments against Obi, a 2023 presidential hopeful.

The former two-term Governor of Anambra State is the candidate of the Labour Party (LP). The cleric had declared that Obi cannot become the President of Nigeria because he is “stingy”. Following outrage, Mbaka, in a lengthy open letter, apologized to Obi and the Catholic Church for his outburst.