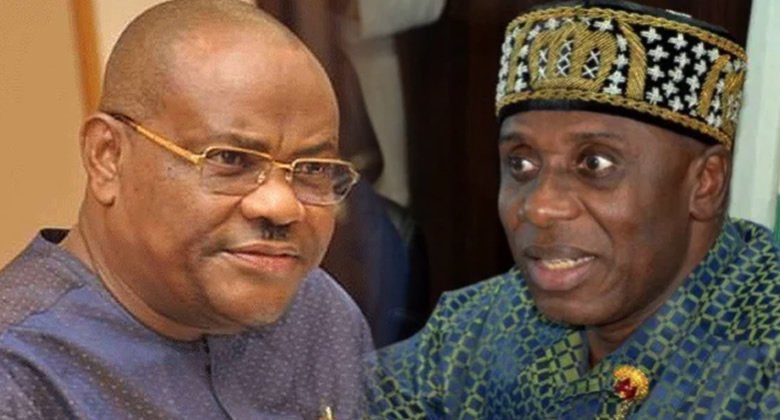 The Rivers State Government has filed a suit against Rotimi Amaechi, a former governor of the state, over alleged fraud.

Governor Nyesom Wike established a seven-man panel in 2015 to investigate Amaechi for allegedly withdrawing N96 billion from the state’s treasury during his tenure as governor.

The panel, led by Justice George Omekeji, had also looked into allegations of the former governor’s “sale of assets.”

Although the panel’s report was submitted in 2015, Amaechi has maintained that he is not guilty of fraud.

However, on May 27, 2022, the Supreme Court dismissed Amaechi’s challenge to the investigation.

Wike directed the state Attorney-General, Zaccheus Adangor, to file criminal charges against the former governor and Sahara Energy, a firm indicted in the deals, weeks after the judgment, according to The Nigeria Law.

The firm is co-founded by Tonye Cole, a businessman and governorship candidate of the All Progressives Congress (APC) in Rivers state.

“Sometime between 2011 and 2012 at Port Harcourt within the Port Harcourt Division of the High Court of Rivers State did conspire among yourselves to commit felony to steal the sum of $274,563,599.59,” count one of the charges read.

In count two, the state alleged that Amaechi and his co-defendants within the same period “stole the same amount of money being proceeds from the sale of 70 per cent equity belonging to her in the power generation assets at Omoku, Trans-Amadi, Eleme and Afam Gas turbines.”

The state further in count five alleged that Amaechi, Sahara Energy, Cenpropsaroten Hotel Management Limited and Cole within the same period “did conspire by fraudulent means to affect the market price of Olympia Hotel Port Harcourt by offering the said Olympia Hotel Port Harcourt for concession exclusively to Sahara Energy Resources Limited and Cenpropsaroten Hotel Management Limited (a subsidiary of Sahara Energy) and Cole (Director) instead of by means of open competitive bidding prescribed under section 60 (1) of Rivers State Public Private Participation in Infrastructure Development Law, number 5 of 2009”.

In count six, the government claimed that Amaechi, Sahara Energy, Cenpropsaroten and Cole conspired among themselves to commit a felony by stealing $ 1 million being the concession fee the defending companies paid to the Rivers State Government for the concession of the Olympia Hotel for a period of 40 years.

The state in count eight alleged that Amaechi and Sahara Energy about December 1, 2014 conspired among themselves to commit felony by stealing the sum of $53,095,602.05 from Rivers Government dollar account number 0064809429 with Access Bank, Bank Road Branch, Port Harcourt.