A fuel attendant has reportedly been shot dead by a yet-to-be-identified soldier at Ashafa Filling Station near Obasanjo Shopping Complex, Minna, Niger State.

The soldier was said to have shot the fuel attendant in Minna after he was stabbed by the boy.

According to PUNCH, an eyewitness, who spoke in Hausa and only gave his name as Abdulkareem, said the soldier was engaged in a scuffle with the fuel station manager which led to both parties slapping each other.

“The soldier and the manager were having a misunderstanding. Though I don’t know who slapped first but they both slapped each other and people started trying to intervene.”

The eyewitness added that as a result of the scuffle, one of the station attendants, who was said to be the brother of the manager, brought out a cutlass and stabbed the soldier who in turn shot him. 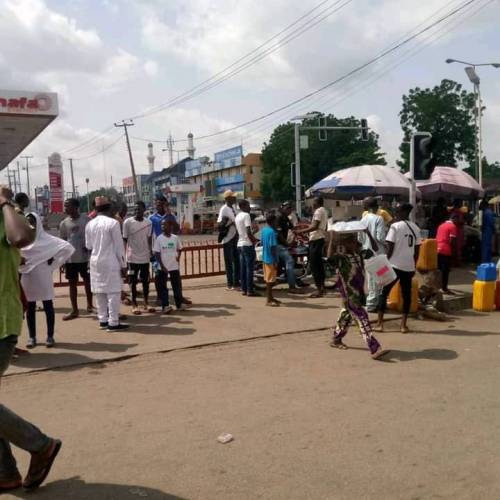 He said, “As people were trying to settle the misunderstanding, one of the attendants, who is the younger brother of the manager, came to support his brother in the fight by bringing out a cutlass and stabbing the soldier”.

He added that the soldier in turn brought out his gun and shot the boy who was then rushed to the hospital.

Another eyewitness said the boy didn’t stab the soldier but brought out his cutlass to threaten him before the soldier pulled out his gun and shot the boy.

He added that the boy did not make it to the hospital as he died before they got to the general hospital.

According to SaharaReporters, the state police spokesman, Abiodun Wasiu, who said “I will call you back”, is yet to do so at the time of filing this report.

In another development, an armed robbery gang on Sunday reportedly robbed a filling station of N1.8 million.
One of the robbers was caught by soldiers while the gang was trying to escape.The soldiers were said to be driving along Agbani Road in Enugu State metropolis when they saw the armed robbery suspects and went after them.

They caught one of them whose identity could not be ascertained at the time of filing this report.

A viral video of the incident seen on Monday, the suspect’s hands were bound behind his back by the soldiers.

A voice could be heard in the video saying that the suspect was one of the members of the gang that robbed the filling station.

The person speaking in the video said, “A staff of the filling station, Pinnacle Oil, Agbani Road was waiting for ‘Keke’ (commercial tricycle) in front of the station with a bag containing N1.8m, which she was taking to the bank.

“In what appeared like a movie, gun-wielding hoodlums jumped out of a minibus and snatched the money.
“As they tried to escape, the unfortunate robber was caught with the help of soldiers who were just driving past.”

However, it could not verify whether the suspect was handed over to the police or later killed, as the soldiers reportedly shot him in the leg.