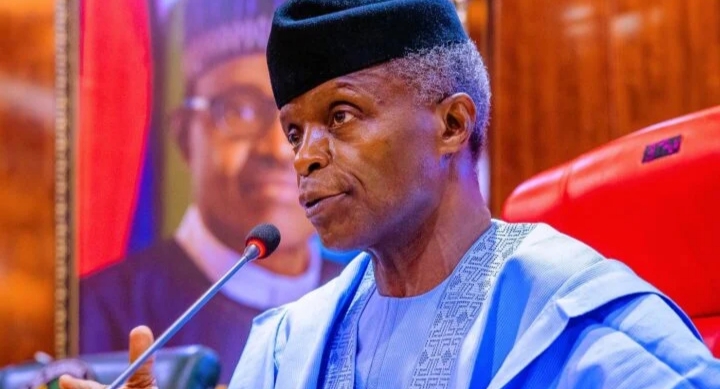 Vice-President Yemi Osinbajo has stated thattraditional rulers should join hands with the state and federal governments to ensure the security of lives and property of Nigerians.

This was made known on Sunday by Osinbajo in Ibadan, Oyo state at a programme organised by Yoruba World Centre, a socio- cultural group.

According to NAN, the event was put together to celebrate Oba Olalekan Balogun, Olubadàn of Ibadan’s first 100 days on the stool.

The vice-president, who was represented by Niyi Akintola, a lawyer, said the charge became necessary for peace to reign across the country.

He said traditional rulers should also prioritise promotion of culture and tradition, saying this would enhance peaceful coexistence and encourage brotherhood.

Osinbajo asked the Yoruba, whom he described as a people of honour and integrity, not to give room to “those who try to destabilise our brotherliness through the display of abnormal acts”.

“We are`Omoluabis’ (well-bred); we have respect for culture and tradition; we respect our elders; we cherish and encourage mutual progress for peace and tranquillity in our communities and in the nation,’’ he said.

He eulogised the Oba, saying for many decades the Olubadàn has shown himself to be a leader who deeply cares for the common man, for progress and for the development of the nation.

The vice-president asked the Oba, as custodian of the ancient culture and traditions of Ibadan, to continue to embody the best value that the people of Ibadan hold.

The Oba in his remarks, appreciated the Yoruba World Centre and well-wishers that attended the programme in his honour.

He pledged to support all activities towards the promotion of Yoruba culture and tradition.