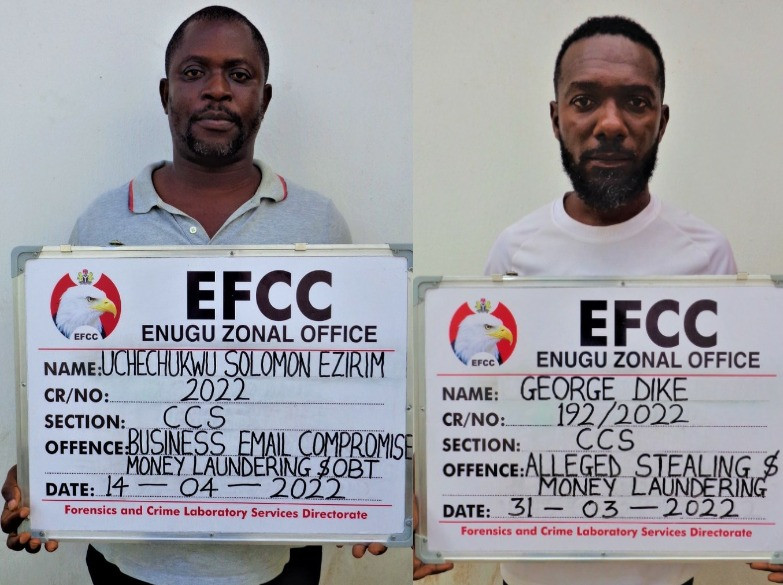 Two fraudsters on the Watch List of the American Federal Bureau of Investigation, FBI, have been sentenced to seven years imprisonment for internet- related offences.

Ezirim’s conviction was based on his trial by the Enugu Zonal Command of the Economic and Financial Crimes Commission, EFCC on two- count charges bordering on forgery, impersonation and obtaining money from unsuspecting foreign nationals under false pretences.

One of the charges against him read: ”that you, Uchechukwu Solomon Ezirim with one Chukwudi Igbokwe currently serving prison term in the United States of America.) sometimes between 2015 and 2017 at Owerri, Imo State within the jurisdiction of this Honourable Court dealt with the card of another person and thereby committed an offence contrary to and punishable under Section 34 of the of the Money Laundering Act (Prohibition ,Prevention, Etc), 2015″.

Justice Buba convicted and sentenced him to three years imprisonment with an option of fine of N1,000,000( One Million Naira). Chimezie, on the other hand was sentenced to four years imprisonment with an option of forfeiting five times the amount he benefited from the crime. He benefited N766,000 from the crime and he is to forfeit N3,830,000( Three Million , Eight Hundred and Thirty Million Naira) in lieu of prison terms.

The convicts’ journey to the Correctional Centre started when they were placed on a Watch List by the FBI for impersonation and cybercrimes. They were later arrested by operatives of the Enugu Zonal Command of the EFCC and charged to court. Their trials ran a full course leading to their eventual conviction.