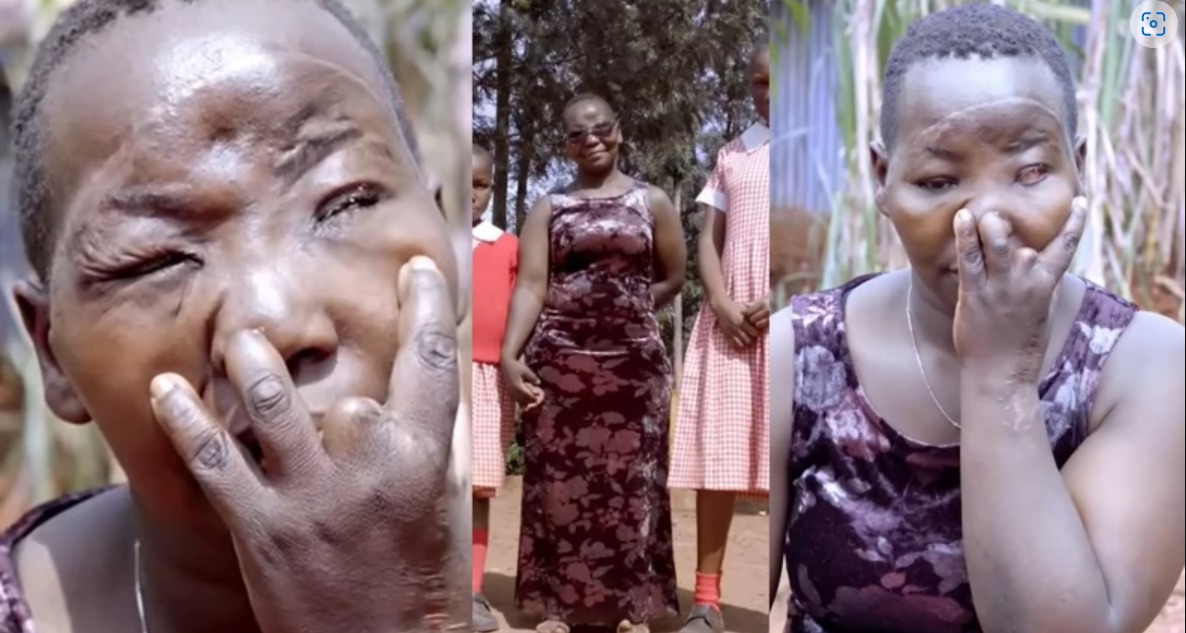 A Kenyan woman identified as Maureen Atieno Omolo, has narrated how her husband plucked off her eye, cut off her finger, and inflicted several machete wounds on her body.

During an interview with Afrimax TV, the lady said the man’s intention was to kill her rather than watch her walk into another man’s arms.

Omolo revealed that she came from a family of four but lost both parents while she was nine. She became an orphan at that tender age and had the responsibility of fending for herself and her younger siblings.

According to her, she was compelled to get married at the age of 15, to get someone to help take care of her and her siblings. Although she didn’t want to get married at that early age, she thought it was the only option available to her at the time.

She said her husband would go to work every day, all in a bid to take care of the family. But there was a big challenge. He wouldn’t want any other man, not even his own friends; he wanted to be the only person in her life.

Omolo said she became a prisoner in her husband’s house as she had to live a solitary life because her husband feared another man might snatch her from him.

She tried to allay his fear, but the man was adamant, saying he had to be protective of her because he loved her. He would lock her up and leave for work, to avoid losing her to another man.

Although the husband’s jealousy was becoming unbearable, she decided to endure it, hoping that things might change in the future.

Omolo disclosed that her husband also vowed that he would rather kill her than allow another man to take her away from him. She took the man’s threat lightly because she thought he had only said it out of love and jealousy.

After some years, she and her husband had four children, but lost one, leaving them with three. One day, she sought her husband’s permission to start doing some business to earn some money to support him in taking care of the family. She had feared that he would not agree to the idea, but he did, surprisingly.

She got a job as househelp in Kenya’s capital, Nairobi, and she had to leave her husband and the children behind and only visit them from time to time. She said; “He warned me that if I ever cheated on him, he would kill me.”

While away, text messaging was one of the means of communication between her and the husband, and he kept reechoing the threat to kill her together with any other man she cheated on her with or tried to leave him for.

While she was keeping herself safe for her husband, a few months later, when she returned home to visit the family, she had the shock of her life. Her husband had gone for another woman.

After crying, Omolo decided to return to the city because she didn’t feel she belonged in the house, but her husband would not agree. He wanted to still have her as his wife and throw the second woman out for her sake.

After she went back to Nairobi, her husband became furious and called and threatened to kill the children if she didn’t come back. She said she quickly returned home to avoid her children being killed. She had to live with her rival, with whom she always had misunderstandings.

She decided to return to Nairobi to retrieve some money that her former employers owed her. Her jealous husband thought she was leaving for good, so he texted her brother to inform him that he was going to kill Omolo.

Before her brother could call to alert her to flee, the man had already launched an attack on her with a machete that his second wife had brought to him. The mother of three said;

He continued to cut her right hand, back and her shoulders with the machete, and proceeded to pluck off her eye and then she blacked out.

He thought she had died, so he left her and drank poison to die but failed. He then ran to the police station to report himself. His second wife too fled.

Omolo was rushed to the hospital and fortunately she survived. She now sells fruits by the road to earn money to take care of herself and children.