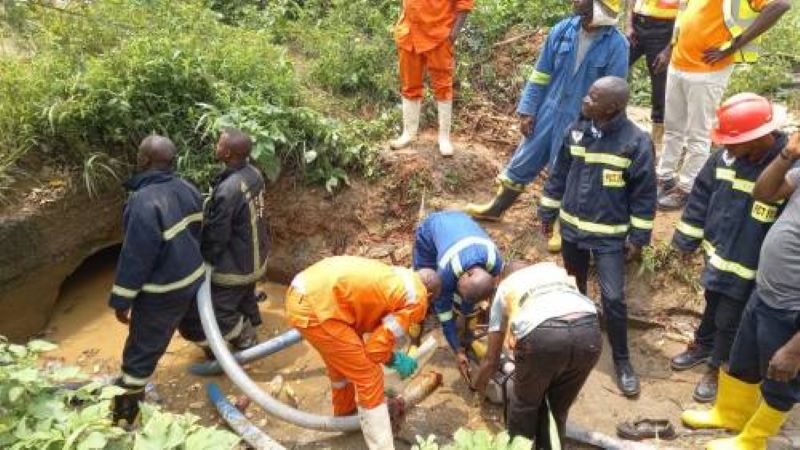 Two persons suspected fuel hawkers were stuck inside the tunnel of a bridge along the Kubwa Expressway, Abuja in an attempt to retrieve their kegs from being washed off by the heavy downpour.

The incident happened on Monday when the bridge was flooded and was on the verge of sweeping away their kegs of fuel stockpiled in the tunnel to sell as black market.

According to SaharaReporters, trouble started when the hawkers sighted the flood and hurriedly entered the tunnel in attempt to prevent their properties from being washed off but they got stuck in the middle which led to confusion in the area.

Rescue operation was carried out by the Federal Emergency Management Agency (FEMA), the FCT Fire Service, the Civil Defence Corps, the Nigerian police and some Vehicle Inspector Officers. 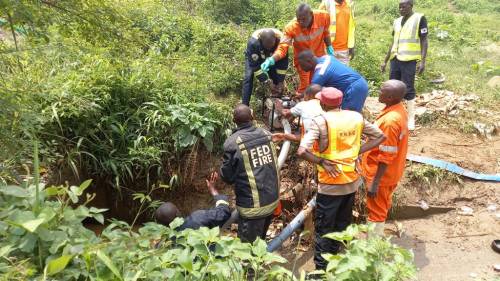 One of the victims was rescued during the operation while the second one was still trapped as time of filling this report.

It was learnt that the rescue operation was hampered as a result of lack of sophisticated equipment to drain the water from the tunnel thereby worsening the situation.

The aforementioned publication reported that upon the arrival of security operatives for rescue operation, one of the officers who entered the tunnel was also got stuck but due to timely intervention of his colleagues, he was rescued and rushed to the hospital for treatment.

The leader of the team, Florence Wenegeeme, said, “Some of these people hawking fuel on the highway; one of their Jerrycans fell into the tunnel and they went inside to retrieve it and they got stuck.

“We were able to rescue one of them and the officer who went inside. We are trying to pump the water out and rescue the second person from the tunnel and that is what is happening.

“So far we cannot say if somebody is dead or not but the persons we rescued have been taken to the hospital.”