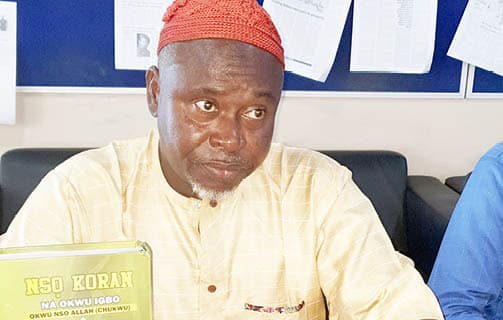 The south-east Igbo Muslims da’wah group has disclosed that it will launch the Holy Quran translated into Igbo language.

This was disclosed on Tuesday by representatives of the group led by Muhammed Muritala Chukwuemeka during a courtesy call to Daily Trust head office in Abuja.

Speaking during the visit, Chukwuemeka, a native of Orlu LGA of Imo state, said it took him five years to complete the translation.

While describing Islam as a religion of peace that forbids killing of fellow humans, Chukwuemeka said he and his team have decided to spread Allah’s message to the Igbo through the translated Quran.

He called on Nigerians to attend the launch which will take place immediately after Juma’at prayer at Ansar-ud-deen mosque located in Maitama, Abuja.

He also called on Nigerians to support mass production of the holy book in order to spread Allah’s peaceful message to the Igbo in the south-east and other parts of Nigeria.

“It took me not less than five years before completing the translation. We are calling on well-to-do Nigerians to assist in mass production of the holy book. Presently, we have printed 500 copies and 100 copies have already been sent to the south-east,” he said.