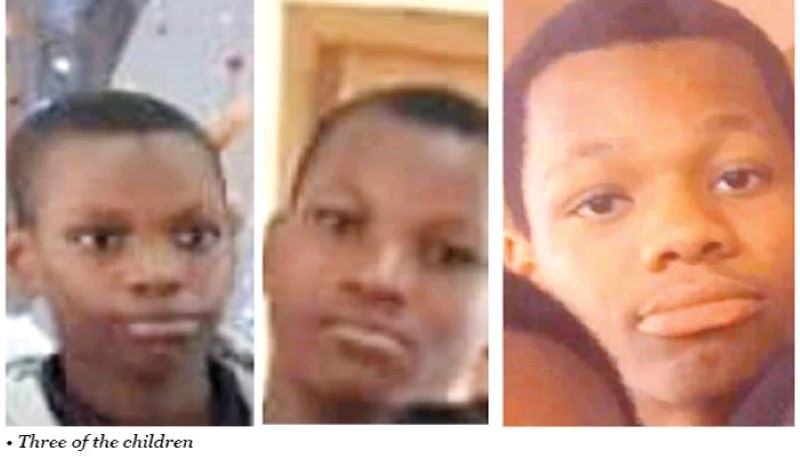 A fire outbreak that gutted a two-room apartment on Tapa Road, Oke-Oko, Isawo, in the Ikorodu area of Lagos State, claimed four children of a couple, Chukwudi Michael and Bolani Michael,

The tragic incident occurred around 1pm on Sunday, June 26, as one of the children, Jeremiah, 12, died on the spot.

The three other siblings: Prayer, 18; Trust in God, 14; and Ebube, 10, sustained severe burns and were rushed to a hospital, where they died a few days later.

According to PUNCH, both husband and wife slept in a separate room with their eight-year-old surviving daughter, Esther.

The fire was said to have engulfed the room where the four boys slept.

The victims’ father, Chukwudi, said that he woke up to the scream of one of his children, who was calling for help.

He said, “After waking up, I alerted neighbours who helped me to break the windows of the boys because their door was locked. We were able to rescue three of the boys from the fire, but one had already been burnt to death. We rushed them immediately to a hospital with the help of a neighbour’s car, but we eventually lost them.”

The 46-year-old noted that men of the Lagos State Fire and Rescue Service only came in the morning when the fire had been put out by neighbours.

However, the Public Education Officer of the state fire service, Amodu Shakiru, stated that the fire was put out by firefighters, adding that five persons were rescued.

He said, “We rescued five persons and recovered the burnt body of a teenager.”

The couple noted that they were oblivious to how the fire started as anything that could start the fire had been put off.

Both husband and wife also sustained varying degrees of burns, which they were treating at the Lagos State University Teaching Hospital, Ikeja.

The state Police Public Relations Officer, Benjamin Hundeyin, who confirmed the incident said, “Yes, it happened. The incident is still under investigation.”