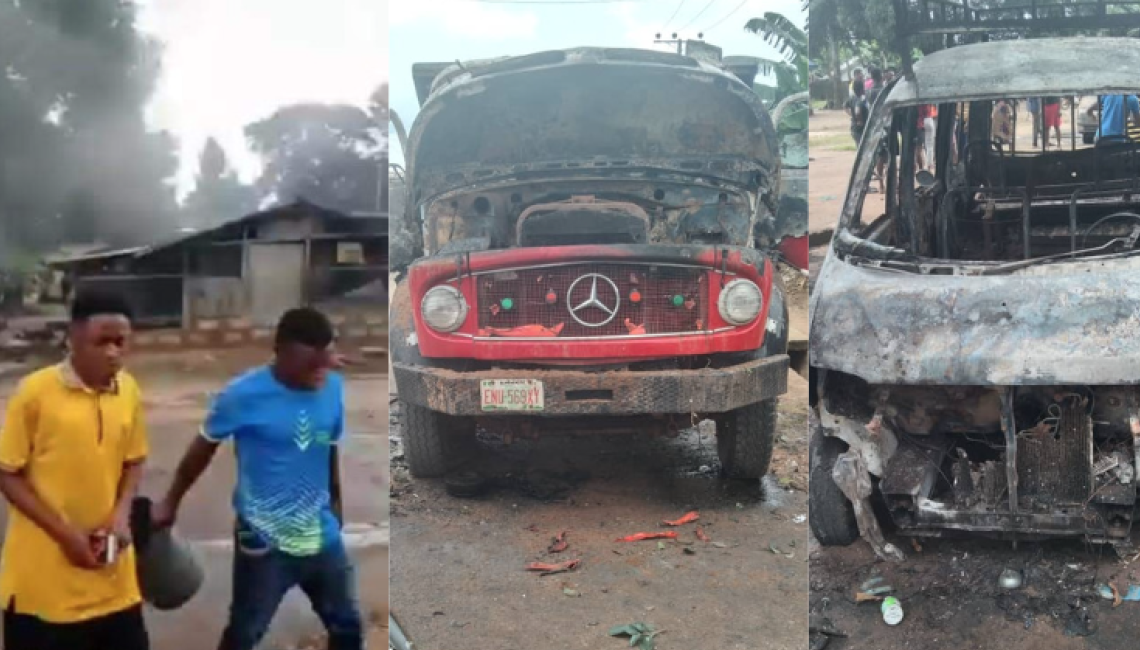 Operatives of South-East Nigerian security outfit, Ebubeagu and troops of the Army shot and macheted no fewer than 10 people after invading Izombe community in Imo State

According to SaharaReporters, eight vehicles and 18 trading houses stocked with goods worth millions of naira were also destroyed.

One of the victims of the assault who gave his name as Mr Sampson Uka, told journalists who visited the community that he was in the house with his children when suddenly the team stormed his compound.

“I was inside the room when I started hearing gunshots and violent noises from the section of our compound with shops.

“My wife even saw the heavily armed security operatives and they pointed guns at her and ordered her to get inside.

“When their noises became less, we came out, and noticed that the shops’ section of our house were destroyed with seven vehicles burnt in Ugbele village alone,” he said.

Uka also said that one Ethelbert Ozor, Simeon Onyekador, and six others sustained gunshot and machete injuries inflicted on them by the group in Ugbele.

“It was in October last year that more than 150 buildings were completely burnt and destroyed in Umuokwu, Umuorji and Ndioko, all in Aborshi Izombe by soldiers over a dispute they had with village boys.

“Nothing has been done on the colossal damage Innocent people suffered, and yet another attack has again been launched on the Izombe,” he said.

Igbokwe said they were still at the first combined Saturday Mass of Catholic Men Organisation and Catholic Women Organisation at Holy Family Catholic Church Izombe when they received calls about the attack.

“We were at Mass with Anuli Nzeocha, a young widow, when she was informed that security operatives had set her shop on fire, people including the priest helped to calm her down,” he said.

Igbokwe appealed to the state government to look into repeated incidents of mass destruction of innocent people’s houses in Izombe and put a stop to it.

Other residents, Kelechi Ozor, Ifeanyi Osondu and Ndukwe Chidi expressed worries over the level of destruction being allegedly masterminded by security operatives and called on Governor Hope Uzodinma to put a stop to the ugly development.

They advised the government to always thoroughly scrutinise intelligence gathered, track the people suspected to be involved in criminal activities and arrest them rather than destroying the houses of innocent people.

The state police spokesman, CSP Mike Abattam, declined to comment when contacted for reaction on Sunday.