Liz Truss: What you should know about new British Prime Minister 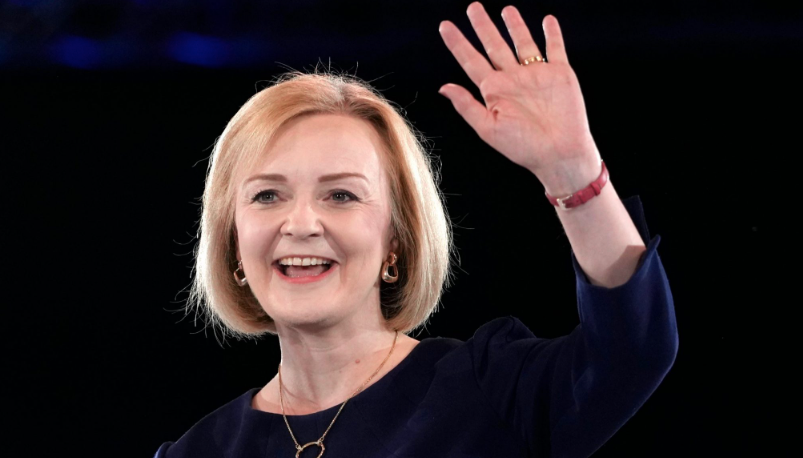 Liz Truss has been named as Boris Johnson’s replacement as prime minister of the United Kingdom, effective immediately after his resignation.

Over 170,000 Conservative members, or a tiny portion of the electorate in Britain, participated in a summer-long election, and the foreign secretary ultimately defeated former finance minister Rishi Sunak by a margin of roughly 57% to 43%.

As the third female prime minister of the UK after Theresa May and Margaret Thatcher, she will have to deal with Britain’s worst economic crisis in decades after winning the race for the conservative party leadership.

Johnson’s resignation will be officially accepted by Queen Elizabeth II on Tuesday after she receives it.

Mary Elizabeth Truss was born on July 26, 1975, in Oxford, England, to Priscilla Mary Truss, a nurse, teacher, and supporter of the Campaign for Nuclear Disarmament, and John Kenneth Truss, an emeritus professor of pure mathematics at the University of Leeds.

The family moved to Paisley, Renfrewshire, Scotland when she was four years old. They lived there from 1979 to 1985. She attended West Primary School there before transferring to Roundhay School in the Round hay neighborhood of Leeds.

Before being accepted to study Philosophy, Politics, and Economics at Merton College in Oxford, Truss spent a year living and studying in Canada. She earned her degree there in 1996.

Truss worked for Shell from 1996 to 2000 and she qualified as a Chartered Management Accountant (ACMA) in 1999.  She also worked in Cable & Wireless, rising to the position of economic director before leaving in 2005.

She became the full-time deputy director of Reform, advocating more rigorous academic standards in schools, a greater focus on tackling serious and organized crime, as well as urgent action to deal with Britain’s falling competitiveness in January 2008 after losing her first two elections.

She has co-authored books such as The Value of Mathematics, Fit for Purpose, A New Level and Back to Black: Budget 2009 Paper and amongst others.

Truss presided over the Lewis Ham Conservative Association from 1998 to 2000.

She unsuccessfully ran for Vanbrugh ward in the Greenwich London Borough Council elections in 1998 and for Blackheath Westcombe in 2002.

She won the Eltham South seat in the Greenwich London Borough Council election on May 4, 2006.

Truss ran for the West Yorkshire constituency of Harmsworth in the 2001 general election. It was a safe seat for the Labour Party, and she finished a distant second, but she increased the Conservative vote by 4%.

Members of the constituency Conservative Association chose her for the South West Norfolk seat in October 2009, and she defeated five other candidates with more than 50% of the vote in the first round of the election.

Shortly after her selection, some members of the constituency association objected to her selection, due to her failure to declare a prior affair with the married Conservative MP Mark Field. While a motion was proposed to terminate Truss’s candidature, this was defeated by 132 votes to 37 at a general meeting of the association’s members after three weeks.

On 6th May 2010, she campaigned for issues including the retention of the RAF Tornado base at RAF Marham in her constituency. Over seven months she asked 13 questions in the Commons about RAF Marham, secured a special debate on the subject, wrote dozens of letters to ministers and also collected signatures on a petition which was delivered to Downing Street.

On 4 September 2012, Truss was appointed as Parliamentary Under-Secretary of State at the Department for Education and also scheduled with responsibility for childcare and early learning, assessment, qualifications and curriculum reform, behaviour and attendance, and school food review; a role that enabled her develop some of the policy areas that she had pursued as a backbencher.

In July 2014, during a cabinet reshuffle, Truss was appointed Secretary of State for Environment, Food and Rural Affairs, replacing Owen Paterson. In apparent contrast to her predecessor, Truss declared that she fully believed that climate change is happening, adding that human beings have contributed to that.

By November 2014, She had launched a new 10-year bee and pollinator strategy to try to reverse the trend of falling bee populations which includes a strategy to revive traditional meadows which provide the most fertile habitat for pollinators and in July 2015, she approved the limited temporary lifting of an EU ban on the use of two neonicotinoid pesticides thereby enabling their use for 120 days on about 5% of England’s oil seed rape crop to ward off the cabbage stem flea beetle;

On 14 July 2016, Truss was appointed as Secretary of State for Justice and Lord Chancellor in Theresa May’s first ministry. She became the first woman to hold either position and the first female Lord Chancellor in the thousand-year history of the office. Even though May’s decision to appoint her was criticised by the then Minister of State for Justice Lord Faulks, who then resigned from the government, as she questioned – on behalf of the judges – whether Truss would have the clout to be able to stand up to the Prime Minister when necessary.

On 11 June 2017, following the general election, Truss was moved to the position of Chief Secretary to the Treasury, attending the cabinet but not a full member of it, in what was seen by some as a demotion.

On 19 March 2020, Truss introduced to Parliament the Trade Act 2021, which established the legal framework for the UK to conduct trade deals with nations around the world.

On 15 September 2021 during a cabinet reshuffle, Truss was promoted from International Trade Secretary to Secretary of State for Foreign, Commonwealth and Development Affairs, hence, becoming the second woman to hold the position after Margaret Beckett.

On 10 July 2022, Truss announced her decision to run in the Conservative Party leadership election to replace Boris Johnson.