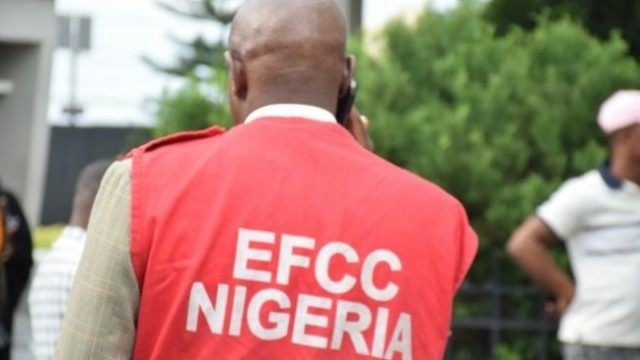 The Economic and Financial Crimes Commission, EFCC, has reported that during a recent raid on illegal miners in Kwara State, no fewer than 45 suspects and 14 trucks loaded with various crude minerals being smuggled out of the state for sale outside of the country were detained.

According to a statement from the EFCC, a truck load of minerals thought to be lepidolite were taken from the Chinese.

However, the anti-graft organisation provided more details about the operation in a statement released after MIREMCO members visited to congratulate the EFCC on the achievement on Tuesday.

According to EFCC no fewer than 45 suspected illegal miners, 14 trucks loaded with assorted crude minerals being smuggled out of the state for sale outside the country were apprehended in the move against the illegal mining business in Kwara State.

Speaking during the visit, MIREMCO commended EFCC for tackling illegal mining activities and non-payment of royalties to the Federal Government.

MIREMCO’s Chairman, Engr. Abdulraman Ottan, who led other executive members of his Committee, declared support for the intervention of the EFCC in regulating the mining sector, which he described as a “bold step”.

“Our committee is very happy and pleased with your recent actions on the mining transactions within the state (specifically, the illegal mining of lithium ore within Pategi Local Government Area) and wish to pledge our total support in ensuring the success of this very necessary but long overdue exercise”, he said.

Continuing, “this action is quite laudable and has projected Kwara state as a mineral -producing state, with high socio-economic consequences, and serves as a signal that Nigeria mining space must be sanitised to achieve the desired economic benefits”.

Ottan, who doubles as the Chairman, Nigeria Mining and Geo-science Society, MGS, Ilorin Chapter, expressed readiness of his committee to collaborate and partner with the EFCC, and urged all sectors to work with the anti-graft agency in its efforts to rid the country of corruption.

“Illegal mining is the worst thing that can happen to any economy, it is not only economic sabotage, but another devastation that causes a lot of socio-economic destruction, insecurity, banditry and a host of other vices”, he said.

Responding, the Zonal Commander, Assistant Commander of the EFCC, ACE Michael Nzekwe, expressed delight with the visit, stressing that, “there is still hope for Nigeria”.

The “EFCC has seen that there are enormous mineral deposits in Kwara State, if rightfully put to use, the state can become a small London”, he said.

The Zonal Commander said that the action of the EFCC to clamp down on suspected illegal miners, in the state, is not to witch-hunt but to regulate the sector and ensure that the right thing is done in line with the mandate of the Commission. He appealed to the people to join hands with the EFCC in its efforts to fight corruption and make Nigeria a better place.