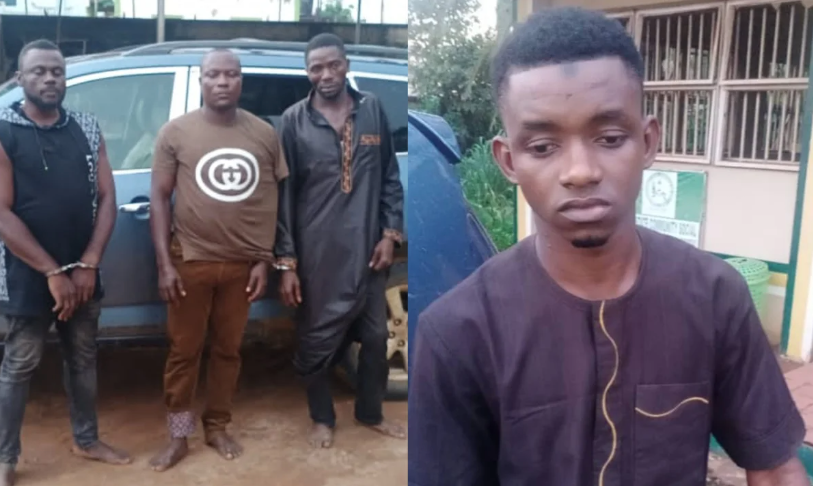 Ikechukwu Oligbo (35), Fidelix Nwankwo (32), and Chinedu Eze (37), the three suspects, were members of the gang of seven who allegedly ransacked three homes in the aforementioned community.

According to a statement made available to journalists on Saturday by the Corps’ Director of Information, Moruf Yusuf, a patrol team of the So-Safe Corps from Atan divisional headquarters had spotted the suspects.

According to Yusuf, the suspected armed robbers were sighted “while cutting the security wire of a building.”

“The officers waited patiently till they went through the back perimeter fence. They then confronted the officers having sighted them,” he explained.

Yusuf added that the patrol team later reinforced to the area of the incident, stating that “upon sighting the officers in their full actions, the suspected armed robbers took to their heels and three out of the seven syndicates were apprehended, while the remaining four are at large.”

Yusuf quoted the So-Safe Commander, Soji Ganzallo, as stating that one 24-year-old Nuru Ahmed, a resident of Alaba Rago, Lagos State, was traced and arrested for allegedly buying stolen phones from the gang.

The said Ahmed was arrested with a number of stolen items found in his possession.

He added that “he confessed to the crime.”

“During preliminary investigation, the suspects confessed without torture that one of their members called Ugor, who is at large, is in possession of their cut-to-size locally-made pistol.

The four suspects and all exhibits recovered had since been handed over to the police in Atan divisional headquarters.