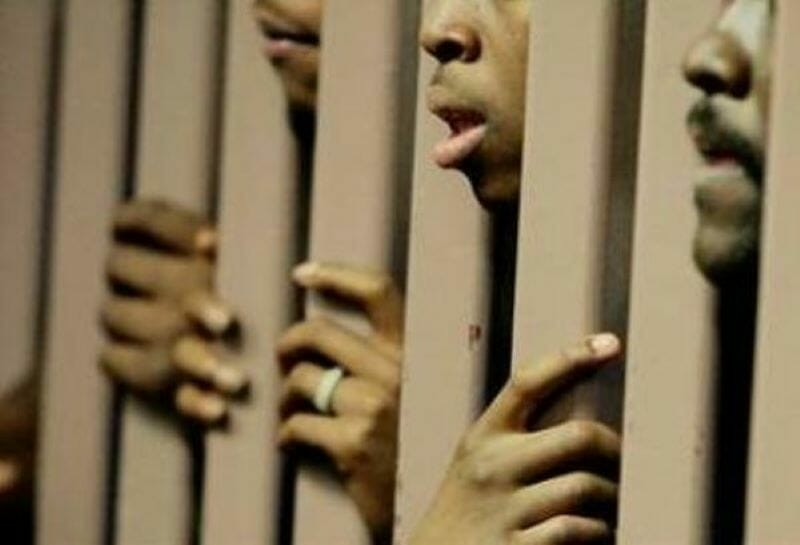 Five persons, arrested and detained by the police at Area Command Headquarters in Onitsha, Anambra state, have recounted how police officers tortured five suspects to death.

During their six weeks of incarceration in the cell, they claimed they witnessed detainees slumped and died inside and outside the cell as a result of severe torture they were subjected to by the policemen on the orders of a serving Assistant Commissioner of Police, ACP.

The detainees, Ifeanyi Ezennakwe (44), Somtochukwu Udemba (21), Emmanuel Okeke (24) and Ifeanyi Ifere (28) said that three of the detainees slumped and died right inside the cell, while two others died outside the cell.

They also alleged that they contracted chicken pox alongside other inmates.

They disclosed this while speaking to newsmen shortly at the General Hospital, Onitsha where they had gone for medical treatment, after their release.

According to Vanguard, they expressed concern that the kind of torture meted out to the deceased suspects usually ranged from shattering their legs with bullets, to flogging/whipping them with iron rods and big sticks, as well as kicking them with hands and legs, adding that once any of the victims slumped and died, police officers would quietly remove the corpse to a morgue and thereafter, deny their presence inside the cell to their friends and relations who came to the station to see them in the police custody.

They recalled that out of the five detainees they counted dead while they were still in detention, three of them slumped and died in front of all the detainees inside the cell mostly at midnight when they could not bear the pains arising from the tortures, while two others died outside the cell.

They further recalled that one of the last deaths that rattled the police was when an indigene of Onitsha was arrested, brought to the station and tortured in like manner. He slumped and died by 2 a.m. and when his relations came to the station in the daytime to ask of him, the police didn’t know what to say and the bereaved vowed to get to the root of the matter.

The former detainees described their stay at the police cell as “horrific and a foretaste of hell fire”. They added that during the one month and two weeks of their sojourn in police custody, they were starved all through day and night, except on rare occasions when they were served with moin-moin and polluted water drawn from the drainage. According to the detainees, their relations who brought food for them were not allowed to have access to them with the food inside the cell except they bribed the police, until their release on Friday, September 16.

They narrated how six of them, as staff of G.U. Okeke & Sons Limited, a subsidiary of GUO Group of Companies were arrested by the police on July 30 at the National Inland Waterways Authority, NIWA, motor park at the Bridge-head, Onitsha following civil dispute between Sir G. U. Okeke and Chief Ngozi Okpagu, even as they claimed that the said civil dispute had been decided in favour of Sir Okeke at an Onitsha High Court presided over by Hon. Justice Nwizu.

They said shortly after the decision of Justice Nwizu in favor of Sir Okeke on the civil disputes, NIWA had written Chief Ngozi Okpagu suspending his activities in the park, until he complied with the orders of the High Court but Okpagu refused to comply it.

“But as of today, Okpagu is still running the NIWA park, collecting dues, tolls and fees running into several hundreds of naira on daily basis with the help of armed policemen deployed to the park by the Onitsha Area Commander, against the larger interests of G.U. Okeke’s Company which has a subsisting grant of the land from the customary owners”, they said.

They further recalled that their arrest by the police arose as they were doing their legitimate duty at the NIWA Park as employees of G U Okeke’s Company, that the complainant allegedly instigated the police to descend on them, with the Area Commander himself personally leading some policemen under his command to invade the park, shooting their guns sporadically into the air that reverberated in the vicinity as people scampered for safety.

The detainees said they were arrested on Saturday, July 30, detained in police cell until they were granted bail by the police on Monday, August 1, and mandated to report at the station on Wednesday, August 3 and when they reported, they were again hounded into the cell and arraigned before a Chief Magistrate Court 1 in Onitsha the next day, Tuesday, August 4.

They claimed that when the complainant discovered that the charge preferred against them in the court by the police conducted likely to cause a breach of the peace only, which he considered was not as grievous as he wished, he instigated and colluded with the police area commander, to amend the charge to armed robbery, a more serious offence which they did not commit, but just to make their case unbailable, elongate their case and imprisonment while awaiting trial in the High Court.

When eventually the robbery charge was slammed against them in the amended charge, the court adjourned the case and ordered that the accused persons be returned to the police custody, following serious objections raised by the defense lead counsel, led by Chris Ajugwe, Esq.

In the meantime, following a petition by the G. U. Okeke & Sons Ltd, the Attorney-General and Commissioner for Justice, Anambra State, Prof. Silvia Ifemeje, requested the State Commissioner of Police, Echeng Echeng to forward the original case file to her office for legal advice, in compliance with Chapter 10 of the Administration of Criminal Justice Law of the state, 2010, Section 160(1) of the extant law.

However, following the application by Motion on Notice by Chris Ajugwe, on behalf of the defendants, Justice S. N. Odili, sitting as a vacation Judge in Awka High court, granted the police detainees bail in the sum of N1 million each with one surety each.

The detainees further alleged that the Area Commander, however, refused to comply with the court order when served on him until the intervention of the state Police Commissioner, following enquiries by journalists from the office of Police Public Relations Officer, PPRO, DSP Tochukwu Ikenga.

The accused persons, having spent a month and a half (six weeks), following their arrest on Saturday, July 30, were released from police custody on Friday, September 16, from where they headed straight to Onitsha General Hospital for medical attention.

The state police spokesman, DSP Tochukwu Ikenga, when contacted said: “There is no such information before me. I urge the witnesses of this incident to come forward for more detailed information, please. This will enable us to conduct a proper investigation.