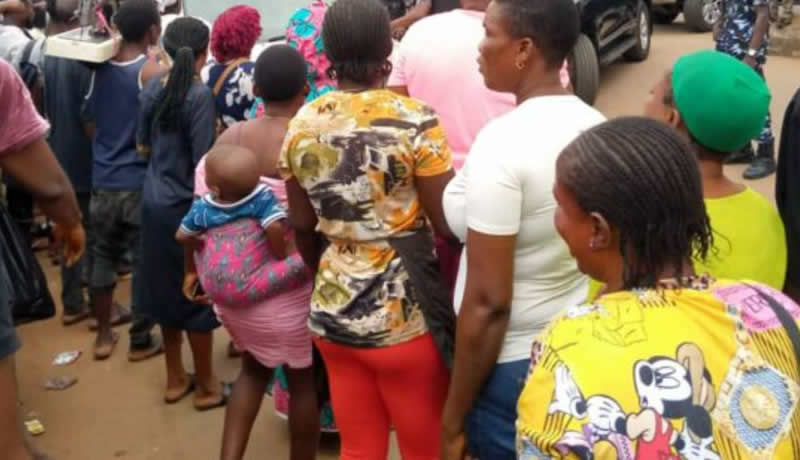 Depict image - spectators at a scene of pandemonium

A native doctor identified simply as Nonso, has ben remanded for allegedly attempting to cut the throat of a 25-year old, Uchendu Uchechukwu, in Umuona village, Isuofia in Aguata Local Government Area of the state

The suspect was said to have dug a 4-feet grave at the back of his compound to bury the mother of two kids, a five-year-old boy and a three-year-old girl with different fathers.

The victim, who claimed to be an orphan and fourth child in a family of eight children, said she had been fending for herself after her parents’ demise forced her to drop out of school at SS2.

She said: “I do menial jobs like picking palm fruits and making between N500 and N700 daily to feed myself and the two kids.

“In 2021, I met Nonso, a young man who claimed to be a native doctor, and he promised to marry me. That was why he was frequenting my house in the last one year.

“On that fateful day, he called me to come around with my children for a surprise package. Without any suspicion, I accepted the offer and he asked his friend to convey us on his motorcycle.

“On arrival, he asked me to close my eyes while he tied my face with a white handkerchief in anticipation of a surprise package. Then he used a sharp knife to slit my throat, forcing me to struggle for survival.

“Immediately, he dragged me to the already prepared grave, he pushed me in and used a big stone to force me to remain there while he went to bring a shovel to bury me and my two kids alive.

“It was at that point that I started shouting for help which attracted his elder sister who had already gone to bed. She ran outside and called other people to rescue me.”

The suspect was immediately apprehended by the mob, who stripped him naked and paraded him before handing him over to security agents. His accomplice who rode the motorcycle however escaped, The Nation reports.

Uchechukwu called on security operatives to assist her in ensuring that justice is served in the matter.

“I am calling on government and security agents to ensure that justice is done. I’m ready to go back to my nylon producing business if I can be assisted to repair the damaged machines,” she said.