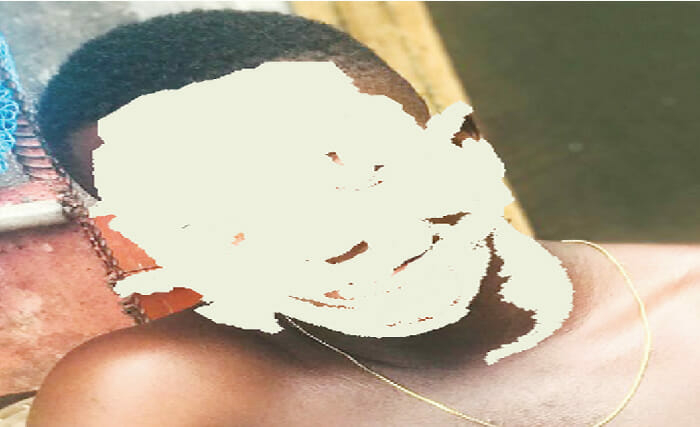 Operatives of the Ogun State Police Command have arrested a herbalist, Idowu Talabi, for allegedly beheading a lotto operator, Isau Oluwatobiloba, for accusing him of stealing his money at their residence around Ilishan-Remo, in the Ikenne area of the state.

It was gathered that Talabi and Oluwatobiloba were at home when the lotto operator accused the herbalist of breaking into his room to steal his money.

The accusation led to an argument between the duo but in a bid to prevent the argument from degenerating, neighbours reportedly intervened and demanded the matter be settled for peace to reign.

It was learnt that after Talabi and Oluwatobiloba were separated, the neighbours went into their various apartments.

However, in the middle of the night, Talabi, while armed with a cutlass, forced his way into Oluwatobiloba’s apartment, and allegedly beheaded him.

Speaking with PUNCH, Oluwatobiloba’s wife, Esther said that she met her husband’s corpse in a pool of his blood when she returned from vigil on Saturday morning.

She said, “We both left home in the afternoon on Friday November 25. I went to see my mother and returned in the evening. I told him I was going to church and he allowed me. I asked him to follow me but he said we should not leave our grandma, Mujidat, alone at home and I agreed and left for vigil.

“When I returned home and entered, everywhere was dark. I was scared, so I called my husband. So, to see clearly, I switched on the torchlight and saw his dead body. I shouted and people gathered. I quickly held Oluwatobiloba and accused him of killing my husband.”

A lawyer to the victim’s family, Kayode Oshiyemi, said Talabi took advantage of Esther’s absence at home to perpetrate the crime, adding that he told the deceased’s wife and grandmother to leave the door of their rooms open because he wanted to perform spiritual cleansing in the whole house.

He said, “The deceased’s wife has briefed me about the incident; she wants justice. The man and the landlord’s grandson were not on good terms. The deceased, who is a lotto operator, accused the herbalist of breaking into his room to steal his money and the herbalist confirmed that he stole his money.

“When the lotto operator’s wife returned from church around 5am and found her husband in a pool of blood, she accused the herbalist of killing her husband. The matter was reported at the Ikenne Police Station and everybody in the house was arrested. In the course of the investigation, one of the tenants living upstairs said he saw the herbalist burning some clothes soaked in blood in the middle of the night.

“It was at that point that the herbalist confessed to the crime. The herbalist said he slaughtered him because he was pompous and always lived as if he was rich and had everything. The herbalist told the police that since the main door was unlocked, he used fire to melt the net and used scissors to open the lock to gain entry into the room.”

The state Police Public Relations Officer, SP Abimbola Oyeyemi, in a statement, said the suspect was arrested following a report lodged at the Ikenne Police Station by the deceased’s wife.

He said, “Upon receiving the report, the DPO Ikenne Division, CSP Ibrahim Ningi, led his detectives to the scene, where it was discovered that the deceased was killed with a machete while sleeping on his bed.

“It was also discovered that there was no break-in at the scene and nothing was removed from the room. The discovery pointed to the fact that the killing was carried out by an insider, hence all the occupants of the house were invited to the station for interrogation.

“After a thorough investigation, Idowu Talabi, who claimed to be a native doctor, confessed to killing the deceased. When asked the reason for the dastardly act, the suspect alleged that the deceased was fond of accusing him of stealing.”