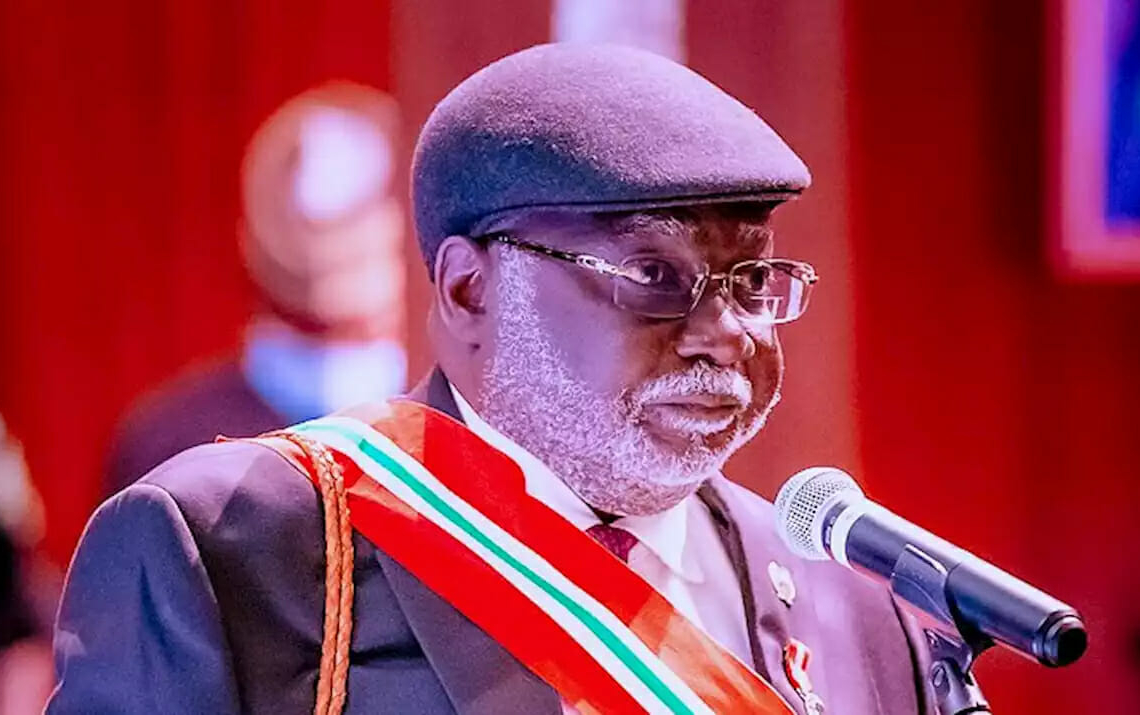 WITHIN NIGERIA recalls that the CJN stated at a recent banquet hosted in his honour by Rivers State Governor Nyesom Wike that he is pleased that the governor of Oyo State, Seyi Makinde, is one of the five disgruntled PDP governors known as the G5 Governors.

However, following controversies and backlash, the Supreme Court of Nigeria ruled in Ariwoola’s favour, stating that his comment about Makinde had been twisted and misrepresented.

In a statement issued on Tuesday in response to the development, Melaye urged Justice Ariwoola to resign immediately for abusing his position by dabbling in partisan politics.

He stated If the CJN decides to stay in office and continue to serve his political friends’ interests, he may choose to recuse himself as Chairman of the National Judicial Council (NJC).

Melaye went on to say that after Ariwoola recused himself as NJC chairman, he should go on leave to allow for a thorough evaluation of his conduct in accordance with Section 5 of the Code of Conduct for Judicial Officers.

The former Senator went on to say that the CJN’s remark had turned him into a partisan politician who could not be trusted with the administration of justice in Nigeria.

With the scandalous conduct of the Chief Justice of Nigeria, it has become expedient and a matter of honour that he resigns from the exalted office that he has demonstrably abused.

If he chooses to prolong his stay in office, to continue to serve the interest of his political friends, he may choose to recuse himself as Chairman of the National Judicial Council, turn himself in as a suspect, proceed on leave, and allow for a thorough evaluation of his conduct in line with the provisions of Section 5 of the Code of Conduct for judicial officers.

The Chief Justice of Nigeria, Hon Justice Olukayode Ariwoola, who has just demonstrated his familiarity with the workings of G5 Governors has by seeking to recruit members into that group turned himself into a suspect, who only can not be trusted with a fair dispensation of justice in Nigeria, but a Chief Judicial Officer who has become tainted and unfit to superintend over the administration of Justice in Nigeria.

The PDP Campaign Spokesman further said that Ariwoola had violated the Code of Conduct for Judicial officers with his partisan comment.

Melaye said the CJN failed to adhere to political silence, rather he chose to be a recruiting agent for a distinct and unmistakable political group.

Graver still, the descent of the Chief Justice of the Federation into the political arena is a gross and indefensible violation of the provisions of the Code of Conduct for Judicial Officers, section 5 of which states as follows:

Accordingly, a judge shall act with such restraint as is necessary to: (a.) maintain public confidence in the impartiality and independence of the judiciary; (b.) avoid involvement in public discussion or discourse if his or her involvement could reasonably undermine confidence in his or her impartiality; (c.) avoid such occasions and circumstances where such involvement may unnecessarily expose the Judge to political attacks or be inconsistent with the dignity of a Judicial officer; and/or (d.) adhere strictly to political silence.

Flowing from the above, the first thing that jumps out in 5(d) is the indiscretion of Justice Olukayode Ariwoola to fail to adhere to political silence. Rather he chose to be a recruiting agent for a distinct and unmistakable political group.

Melaye asserted that Ariwoola has exposed the judiciary to political attacks and acted in a manner that is inconsistent with the character and calling of his exalted office.

The former lawmaker added that the CJN had a duty to save the judiciary and Nigeria’s democracy.

The Chief Justice of Nigeria has by his pronouncement desecrated the dignity of the Judiciary, demonstrated partiality, eroded public confidence, exposed the judiciary to political attacks and acted in a manner that is inconsistent with the character, colour, and calling of his exalted office. In fact, he broke all the rules in this section. This represents a sad irony. It is a case of the gatekeeper carting away the goods in his custody.

We are worried by this development, as this has confirmed the suspicion in certain circles that the judiciary has compromised its independence and is now dependent on certain interests, particularly in the executive branch.

One can imagine a scenario in which the group the Chief Justice of Nigeria has patronised so openly appears before him with another party in a dispute. Where he presides bias can not be ruled out and where he does not preside his influence on other judges can not be discounted.

Hon Justice Olukayode Ariwoola has a duty to save the Judiciary, himself, and Nigeria’s democracy.