Qatar 2022: Despite beating Brazil, Cameroon crash out of World Cup 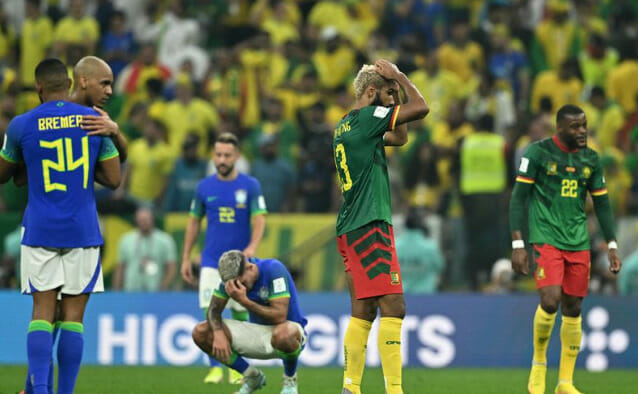 Vincent Aboubakar scored the only goal of the encounter for Cameroon to earn the famous win over the Samba boys of Brazil.

Despite the win, the Indomitable Lions crashed out of the World Cup.

Aboubakar, Cameroon’s captain, was sent off for a second yellow card after removing his shirt during a wild goal celebration as the African nation finished the game with ten men.

Brazil registered over 20 shots in the encounter but met a mixture of poor finishing, a sturdy Cameroon defence, and Devis Epassy, their goalkeeper, who stood resolute.

The outcome means Cameroon became the first African nation to beat Brazil in a World Cup match. It is also the second time ever Cameroon will beat Brazil.

Cameroon ended Group G with four points while Switzerland’s 3-2 win over Serbia propelled them to six points and second in the group.

Brazil also finished on six points but retained their status as group winners despite the defeat, thanks to a better goals difference.

Brazil will face South Korea in the round of 16 while Switzerland will square off with Portugal for a place in the quarter-final.