‘Your failure responsible for nationwide hardship’, Governors hit back at FG 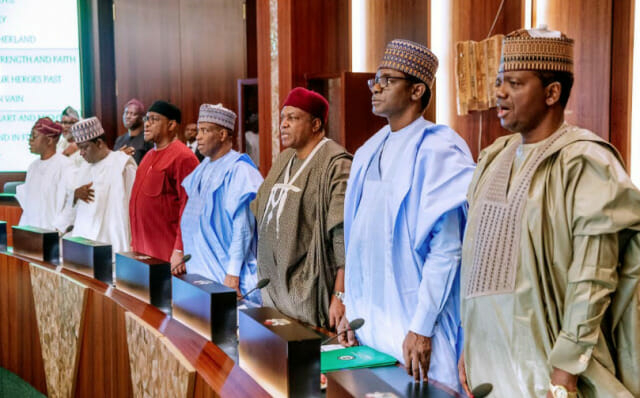 The Nigeria Governors’ Forum (NGF) has accused President Muhammadu Buhari for being responsible for the nationwide hardship because he has allegedly failed to fulfil his 2019 campaign promises.

WITHIN NIGERIA recalls that the Minister of State for budget and national planning, Clement Agba, had blamed state governors for the nation’s poverty index, saying the governors had abandoned the poor citizens in the rural areas, only to build airports and flyovers.

A day after the Minister’s comment, President Buhari also accused the governors of stealing from the local government allocations.

Reacting to the allegations on Saturday, the Director of Media and Public Affairs of the Nigeria Governors’ Forum (NGF), Abdulrazaque Bello-Barkindo said the federal government should not blame the governors for its failure to lift Nigerians out of poverty, provide security and make life better for the people.

“It is the federal government that, in its campaign message in 2019, promised to take 100 million Nigerians out of poverty. Today, records show that more than 130 million Nigerians are living below the globally accepted poverty line of a dollar a day. Under the current administration that Mr Clement Agba is minister, the national cash cow, the NNPC, had failed to remit statutory allocations to states in several months.

“The situation had compelled governors to rely on other sources of revenue like; the SFTAS programme and other interventions anchored by the NGF, to fund states activities while monies budgeted for such federal ministries as agriculture, rural development and humanitarian affairs are not being deployed in the direction of the people.

“The Minister who should be responding to a question demanding to know what he and his colleague, the Minister of Finance, Budget and National Planning, Zainab Ahmed, were doing to ameliorate the hardship Nigerians are facing attempted to defray the notion that rising levels of hunger and lack were peculiar to Nigeria.

“It is the opinion of the governors that the dereliction that the Minister is talking about lies, strictly speaking, at the doorstep of the federal government which he represents, in this scenario,” the part of the statement reads.

The NGF further noted that the primary duty of the government is to ensure the security of lives and property, however, the current administration has been unable to fulfil this covenant with the people.

“First and foremost, the primary duty of any government is to ensure the security of lives and property, without which no sensible human activity takes place. But the federal government which is responsible for the security of lives and property has been unable to fulfil this covenant with the people thus allowing bandits, insurgents, and kidnappers to turn the country into a killing field, maiming and abducting people, in schools, market places and even on their farmlands.

“This dereliction of duty from the centre is the main reason why people have been unable to engage in regular agrarian activity and in commerce. Today, rural areas are insecure, markets are unsafe, surety of travel is improbable and life for the common people generally is harsh and brutish.

“The question is, how can a defenceless rural population maintain a sustainable lifestyle of peace and harmony when their lives are cut prematurely, and they wallow permanently in danger? How does a minister whose government has been unable to ensure security, law and order have the temerity to blame governors?

“Two states, Edo and Akwa Ibom had promptly responded to the vituperations of the Minister. According to Akwa Ibom State, what determines poverty and unemployment in a country is its economic policy, which is set, normally by the central government nationally.

“Akwa Ibom insists that the federal government cannot abdicate its responsibility by blaming states and goes further to ask, albeit rhetorically, how economic policies in a state drive the dollar which determines almost every aspect of our national existence,” the e NGF noted.