Ekiti: 24-year-old cultist who raped virgin to die by hanging 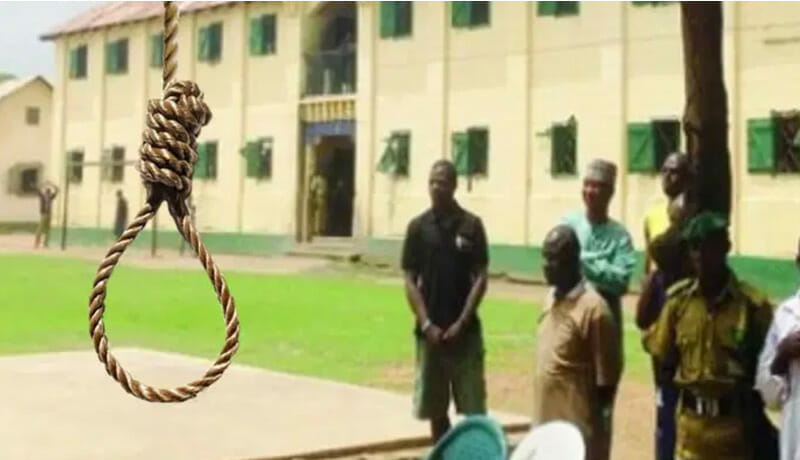 24-year-old man, Segun Iwaetan, has been sentenced to death by hanging for being a member of a secret cult and life imprisonment for raping a 20-year-old neighbour and student of Federal Polytechnic, Ado Ekiti.

The defendant was tried on a seven-count charge bordering on rape, unlawful possession of firearms and membership of secret cult among other offences.

According to the charge sheet, “Segun Iwaetan and Atila Iwaetan (now at large) on January 16, 2021 at Federal Polytechnic Road, Ado Ekiti, did conspire to commit burglary and stealing, break into the shop of Olayemi Oyerinde, received stolen properties such as 50 jean trousers, 15 polo shirts, 30 pairs of leather slippers among others, worth over N1.8million.

“Also on February 5, 2021, the defendant raped a 20-year-old Federal Polytechnic student at Odo Ado Street, Ado Ekiti while unlawfully in possession of two guns, he was on February 10, 2021 found to be a member of the Eiye confraternity secret cult,” it stated.

In her testimony, the rape victim stated, “The defendant was my neighbour. On that day, he gained access to my room around 3am, he pointed a gun at me and ordered me not to shout or else he would shoot me. He ordered me to undress and forcibly had sex with me. As at the time he raped me, I was still a virgin. Thereafter, he begged me to forgive him and said I should not tell anybody.”

The defendant, who spoke in his own defence through his counsel, called no witness.

Delivering the judgment, Justice Adeniyi Familoni, convicted the defendant on four of the charges.

Familoni said, “The defendant is sentenced as follows: Conspiracy and unlawful possession of firearms, he is sentenced to 12 years imprisonment each without any option of fine, sentences are to run concurrently from the date of his arrest and detention of the defendant.

“On rape, the court sentenced the defendant to life imprisonment,” while for membership of Eiye confraternity secret cult, the judge told the defendant, “The sentence of this court upon you is that you be hanged by the neck until you be dead and may the Lord have mercy on your soul.”