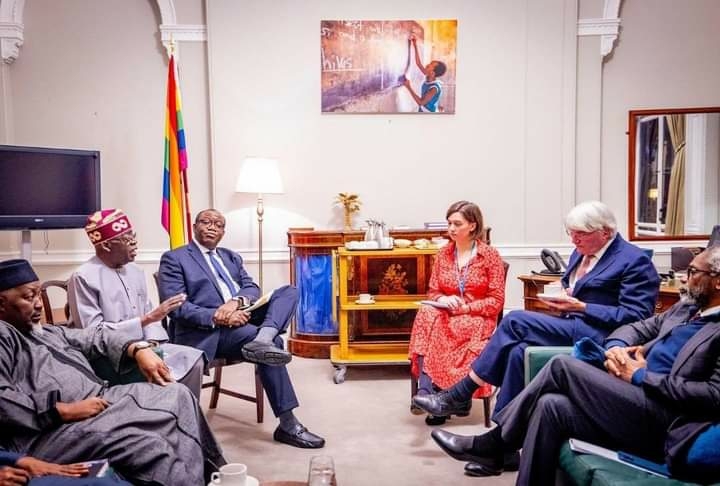 The presidential flagbearer of the All Progressives Congress for the 2023 election, Bola Tinubu, on Tuesday, met with the United Kingdom Minister for Africa, Foreign & Commonwealth Development Office, Andrew Mitchell, in London.

Speaker of the House of Representatives, Femi Gbajabiamila; Kaduna State governor, Nasir El-Rufai; Jigawa State governor, Abubakar Badaru; and other dignitaries were present at the meeting.

The former Lagos State Governor is currently in the UK to interact with relevant stakeholders ahead of the February 2023 poll.

Tinubu was at Chatham House in London on Monday where he spoke on how he would tackle the economic and security challenges bedevilling the nation if elected president in 2023.

Meanwhile, the former Lagos Governor in a pre-recorded interview with the British Broadcasting Corporation (BBC), explained how he made his money, which he claimed was through real estate, adding that he would not deny his wealth.

Throwing more light on this, Tinubu stated that if the people, who questioned his sources of riches were not enemies of wealth, they should stop criticising him.

“I inherited great real estate and I turned the value around,” he said, stating that he remained the most investigated Nigerian politician till date.

“I have not taken government appointment, no government contract,” Tinubu said, adding that, the allegation that he was in charge of the revenues accruing to Lagos remained unproven, and that he has been investigated several times without any dirt, saying, “It’s envy”.